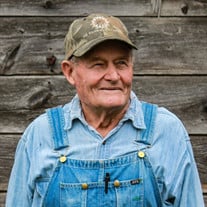 Kenneth Simpson, age 98, of Mt. Carroll, IL passed away in the early hours of Wednesday, March 25, 2020, in his home. A private graveside service will take place at Oak Hill Cemetery in Mt. Carroll. A Celebration of Life gathering will be planned for a later date. Ken was born December 9, 1921, in Hillsdale, IL, the son of Byrlen and Grace (Getty) Simpson. After his mother’s untimely passing, his father re-married, and Bertha Simpson took on the role of loving step-mother. Ken attended Hillsdale schools, graduating from Hillsdale High School. Ken then married Leola Brown, and started their family. They had five children, and worked their farm in Port Byron, IL. In the 1950’s, Ken and Leola moved their family to their new farm in Mt. Carroll. Ken was a talented woodworker. He could build just about any piece of furniture, and a beautiful one, at that. He spent countless hours building furniture, which he sold all over the Midwest. He also later became a locksmith. He was a man of simple taste and enjoyed the little things in life. Faith, family, and life’s simple treasures were Ken’s focus. He spent many of his days tending to the never-ending work on the farm, and keeping to himself in his shop, and that’s what he preferred. But, if there was anything that could pry Ken away from his peaceful solitude, it was his family; notably, his grandchildren. He loved those grandkids, and treasured time spent with them. Ken will be dearly missed by his daughter, Bonnie (Bob) Donnell, of Sterling, IL; sons, Glen (Linda) Simpson, of Lewiston, MI and Kevin Simpson, of Milledgeville, IL; daughters in law, Sue Simpson and Nina Simpson; 20 grandchildren; 20 great-grandchildren; 11 great-great-grandchildren, and one great-great-great-grandchild. What a special thing it was to have 6 generations in the presence of one another! Ken is preceded in death by his father and mother, Byrlen and Grace; step-mother, Bertha Simpson; wife, Leola; sons, Russ Simpson and JR Simpson; two brothers; a sister; and four grandchildren.

Kenneth Simpson, age 98, of Mt. Carroll, IL passed away in the early hours of Wednesday, March 25, 2020, in his home. A private graveside service will take place at Oak Hill Cemetery in Mt. Carroll. A Celebration of Life gathering will be... View Obituary & Service Information

The family of Kenneth Simpson created this Life Tributes page to make it easy to share your memories.

Send flowers to the Simpson family.