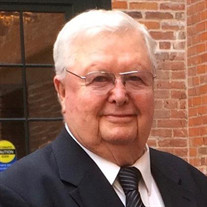 William “Bill” Lee Schneider, age 87, of Savanna, IL, passed away suddenly, in his home, on June 22, 2020. A celebration of Bill’s life will be held Sunday, August 2, 2020, from 1pm to 3pm. Bill was born May 21, 1933, on the family farm in Mount Carroll, IL, the son of E. Kenneth and Gladys (Campbell) Schneider. He grew up learning about crops, livestock and with a love of nature and the outdoors. Following graduation from Mount Carroll High School, Bill served in the U.S. Army for four years. On June 22, 1957, he married Lelia Chapin. They raised four sons together. Bill returned to work on the family farms with his father and brothers. He taught his sons about farming and worked alongside them, building many memories over the years. He cheered his boys on at their baseball and basketball games as he watched them grow. Bill loved his family immensely and took great pride in his boys, their families, his grandchildren and great-grandchildren. He also loved to cook and eat, and was an unabashed food critic. His last meal was a prime rib supper on Saturday, June 20th prepared by his son Tim, during which he said the meat was tough. Bill stayed busy throughout his retirement, collecting antiques and helping on the Robert Haas Farms. He valued his friendships with Robert Haas, Mark Cronin and others at the Haas Farms. He will be dearly missed by his former wife, Lelia Schneider, of Mount Carroll; four sons, Michael, of Jacksonville, NC, Tim (Tammy), of Mount Carroll, William (Debbie), of Memphis, TN, and James (Michele) of Grand Rapids, MI; 13 grandchildren, Ashley (Noah) Flemming, Matthew (Katie) Schneider, Devon (Dalena) Schneider, Darin (Heather) Schneider, Paige (Aaron) Wies, Tina (Vince) Marotta, William (Billy) Schneider, Christopher Schneider, Margaret (Maggie) Schneider, Cayley Schneider, Lauren Schneider, Kristina Delamar, and Heather (Jason) Russell; and seven great-grandchildren, Lee Michael Flemming, Jackson Flemming, Addison Schneider, Quentin Schneider, Harper Schneider, Sawyer Wies, and the newest addition to the family, Calvin William Schneider, who was born less than a day after his great grandfather’s passing. Bill is also survived by brothers, Kenny Schneider and John Schneider, both of Mount Carroll. Bill is preceded in death by his parents, E. Kenneth and Gladys, his brother David Schneider, and sisters Mary Kessler, Norma Woessner, Doris Smith and Betty Kessler.

The family of William Lee Schneider created this Life Tributes page to make it easy to share your memories.