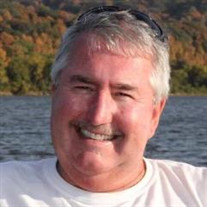 William “Mike” Miller, 62, passed away after a hard fight with emphysema on Monday, February 14, 2022, in Madison, Wisconsin, surrounded by his wife and children. A visitation will be held on Friday, February 18, 2022, from 5:00-8:00 pm at Law Jones Funeral Home in Hanover, Illinois, as well as one hour prior to the funeral service on Saturday. Funeral services will be held on Saturday, February 19, at 11:00 am at St. Paul Lutheran Church in Hanover, Illinois. Mike was born February 2, 1960 in Rockford, Illinois, to Dixie Gayton and William Miller. He moved to Hanover, Illinois, in 1973 where he graduated high school, met, and married the love of his life, Diana, and raised three children. Mike and Diana celebrated 40 wonderful years of marriage in October 2021. He also worked as a machinist at Kelly Springfield (Titan Tire) for over 42 years, retiring in 2020. Mike never met a stranger and had an infectious smile that so many will remember. He was always up for a good time and never shy to share his opinion. He particularly loved spending summers with his family and “river family” on the beach. Mike also enjoyed being in the woods hunting, traveling, hitting the slopes all winter, and being everybody’s volunteer photographer. Recently, he was thrilled to have his photo The Old Barn featured in the 2022 Jo-Carroll Energy calendar. Mike was very proud of his three children and would often be heard bragging of their lives and accomplishments. Over the past seven years, he may have found his favorite role yet, being “Papa” to his four grandchildren and three “grand-puppies.” Mike is so dearly missed by his wife Diana; children Josh (Paige) of East Dubuque, Illinois; Jeremy of Hanover, Illinois; and Kayla (Cody Graves) of Elizabeth, Illinois; grandchildren Aiden, Adeline, Izabella, and Simon; father Bill of Hanover, Illinois; and many brothers, sisters, and in-laws. He is preceded in death by his mother Dixie and brother Brian.

The family of William "Mike" Miller created this Life Tributes page to make it easy to share your memories.

William “Mike” Miller, 62, passed away after a hard fight with...