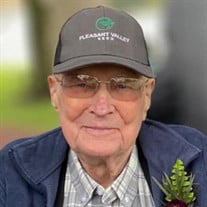 William “Bill” E. Miller, age 89, of Shannon, IL, passed away Tuesday, January 5, 2021, at FHN Hospital, in Freeport, IL. A private family graveside service will be held Saturday, June 12, 2021. Bill was born October 23, 1931, in Macomb, IL, the son of John and Helen (Mowery) Miller. Growing up in Bushnell, IL, Bill attended Bushnell schools, ultimately graduating from Bushnell High School. Shortly thereafter, he enlisted in the National Guard, ready to do his part in serving his country. On April 11, 1954, Bill married Pauline Hultgren at Bethany Lutheran Church, in Burlington, IA. The couple went on to raise three children, and celebrated many decades of marriage before Pauline’s passing in 2012. In his younger years, while still in Bushnell, Bill worked as a mechanic for the local Ford garage, before opening an upholstery shop, and later Miller’s Laundry and Dry Cleaning. In 1973, he and Pauline moved to the Lake Carroll area. Here, they worked together for 20 years in the construction and real estate businesses. It was here that Bill also started Miller Sales and Service, which later become Miller Sport Center. In his free time, Bill enjoyed fishing, and even flew as a pilot in his late teens. He especially loved to snowmobile. He, Pauline, and their kids logged many hours on those snowmobiles. They were active in the local snowmobile club, and often planned and organized trips up north, and out to Yellowstone National Park. Bill will be dearly missed by his son, BJ (Debbie) Miller, of Lake Carroll, IL; daughters, Deb (Dick) Lavender, of Cadillac, MI, and Linda (Fiance, John Becker) Lawfer, of Shannon, IL; five grandchildren, Matt (Tracey) Miller, of Shannon, IL, Ronni Miller, of Davenport, IA, Patrick (Erin) Lavender, of McBain, MI, Nicole (Cory ) Haas, of Elizabeth, IL, and Jenna (Mike) Piche, of New Glarus, WI; and eight great-grandchildren, Ava and Sienna, Bella and Kenzie, Eli and Weston, and Owen and Callen; a brother, Jim (Roberta) Miller. Bill is preceded in death by his wife, Pauline; parents, John and Helen; and brother, Jack Miller.

The family of William E. Miller Sr. created this Life Tributes page to make it easy to share your memories.