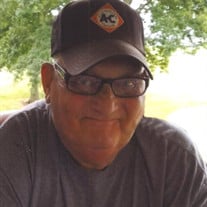 William Elden Green, Sr., age 71, of Massbach, passed away Saturday, May 2, 2020 in his home. A private family funeral service will be held in his honor, with burial taking place at Albreicht Cemetery. Family and friends are invited to share in Bill's life at lawjonesfuneralhome.com. Bill was born December 4, 1948, in Savanna, IL, the son of Lyle and Lorena (Johnson) Green, Sr. On November 12, 1965, he married Donna Mae Sipe, in Savanna. He made a career of the railroad, working for Milwaukee and River Point Railroads for 30 years. He retired in 2008. Bill loved to 'coon, rabbit, and squirrel hunt. He loved it so much, that even when, in his later years, he was put on oxygen, he'd load his tank onto the lawn mower, and drive out into the woods, rifle in hand, looking for a squirrel. Simply put, Bill just loved the outdoors. He's spend countless hours mowing the lawn, cutting wood, and of course, playing horseshoes with his brothers. He especially enjoyed tending to his oversized garden with his beloved Donna working at his side. Every year that grew enough potatoes and vegetables to feed not just the neighbors, but the whole countryside. But most of all, Bill loved his family. That focus of that love began with his wife, Donna, and spread to his children and grandchildren, and all the members of his very large extended family. He will be dearly missed by his wife, Donna; son, William Green, Jr., of Savanna, IL; daughter, Lisa (Tony) Kinder, of Savanna, IL; four grandchildren, Kristin (Mike) Hart, of Sterling, IL, Patricia Green, of Lawton, Oklahoma, Katelyn (Jeremiah) Kaberlein, of Springfield, MO, and Stacie Herrington, of Savanna, IL; three great grandchildren, Addison Hart, Eleanor Hart, and Jordan Benavides; mother, Lorena Green, of Savanna, IL; four brothers, Lyle (Mary) Green of Elizabeth, IL, Enoch (Ramona) Green, of Elizabeth, IL, Tony (Vicki) Green, of Savanna, IL, and Randy (Jennifer) Green, of Elizabeth, IL; two sisters, Bonnie Howard, of Mount Carroll, IL and Laurie (Jim) Kehl, of Massbach, IL; sisters-in-law, Bernice Johnson, Harriet Olson, and Linda (Pete) Southerland; and many nieces and nephews. Bill is preceded in death by his father Lyle Green, Sr.; a great-grandson, Tyler Benavides; sister, Lyla; brothers, Larry, Russell, Danny, Earl, Doug, Ray, and Andrew Green; sister-in-law Debra Green; and nephew Brian Green.

William Elden Green, Sr., age 71, of Massbach, passed away Saturday, May 2, 2020 in his home. A private family funeral service will be held in his honor, with burial taking place at Albreicht Cemetery. Family and friends are invited to share... View Obituary & Service Information

The family of William Elden Green Sr. created this Life Tributes page to make it easy to share your memories.