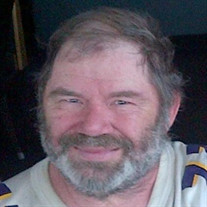 William Fry, age 66, a life-long farmer, died Wednesday, February 10, 2021 at St. Anthony Medical Center, Rockford, Illinois. A Celebration of Life service will be held 12:30 p.m. Thursday, February 18, 2021 at Law-Jones Mt. Carroll. Visitation will be held one-hour prior from 11:30 a.m. – 12:30 p.m. Thursday. Burial will be in Oak Hill Cemetery, Mt. Carroll. Services will be live on Facebook in this group: https://www.facebook.com/groups/239762824479477/?ref=share William was born December 2, 1954 in Freeport, the eldest son of Forrest and Mary “Virginia” (Bissikumer) Fry. He grew up on the family farm and loved working alongside his dad. Evergreen Farm was the neighborhood playground where nearby friends and those from town would gather to play whatever sport was in season – football, basketball, baseball, swimming, or ice hockey on the frozen pond. Other favorites were riding minibikes, building snow and tree forts with dad, flashlight tag, sleeping outside, and bonfires with wiener roasts. Years later, he was a regular at pick-up basketball games at local schools and especially enjoyed Gus Macker tournaments. William also took up downhill skiing which included several memorable trips to Colorado. His mother, a long-time teacher in the MTC country and modern school system, helped foster a love for reading and William’s early favorite books were Science Fiction (anything Star Trek). These were great years for William and his younger brother, Nowell. William played basketball and football in high school, especially remembering the Conference Championship football game against Milledgeville during his senior year, when William recovered a fumble, leading to a win for Mt. Carroll! In Building Trades, he helped construct a house on East Lincoln Street and began working at Atwood, where he continued for several years after graduating with the Class of 1973. William also attended Highland Community College in Freeport which was around the time he began farming with his parents. As a farmer, William was an early adopter of minimum and no-till farming and it was important to him to participate in conservation programs which included planting many trees. After his father passed in 2000, William often relied on the generous assistance of his neighbors and close friends to get the job done. He greatly appreciated their help and the special bond of friendship that formed was very important to him. William enjoyed hanging out with the guys at Charlie’s and their Sunday Music Nights. He was a regular attender at auctions and farm sales looking for treasures. William loved watching movies, particularly about history and the Civil War. One of his proudest moments was standing-up as Best-Man in his brother’s wedding. Throughout all the years apart physically, they never ended a phone conversation without telling each other “I love you”. William will be dearly missed by his brother, Nowell (Monica) Fry of Schwenksville, Pennsylvania, close friends, and relatives. He is preceded in death by his parents.

The family of William Fry created this Life Tributes page to make it easy to share your memories.

Send flowers to the Fry family.