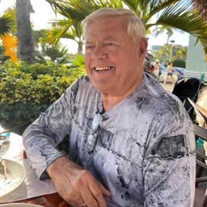 Willard Louis Carby, Jr., age 79, of Lake Carroll, Illinois passed away suddenly from natural causes at his home in Lake Carroll Wednesday, May 11, 2022. He was an inspiration to his family and friends, always caring, giving of himself, and making life fun. Willard was born March 25, 1943 in Streator, Illinois. Growing up on the family farm, he would help milk the cows before riding his bike off to school. He is a 1961 graduate of Woodland High School where he played basketball, football and baseball. In 1963 he enlisted in the US Airforce, working as an airplane technician, and had an opportunity to work on Airforce One during the Johnson presidency. He was stationed in Hawaii and his service also took him to Korea and Vietnam. On August 21, 1987, Willard married Karen Rynkus. They brought together a blended family and celebrated 35 years of marriage. Willard and Karen lived in Wood Dale and Bloomingdale, Illinois. In 1991 they built a home at Lake Carroll and moved there fulltime in 2006. They have enjoyed golfing, fishing and traveling together. Willard also served on the Golf committee and enjoyed his work with the fish hatchery as a member of the Fishing Club. He was also an active member of the Moose Lodge in Palm Beach Gardens, Florida. He was successful in sales throughout his career. He worked for Chicago Cardboard, helping businesses advertise and designing displays. He later worked for Rapid Mounting & Finishing in Chicago. Willard counted himself lucky- to have a loving and caring family; to split time between Lake Carroll and North Palm Beach; and to score three hole-in-ones during his lifetime. Willard will be dearly missed by his wife, Karen of Lake Carroll and North Palm Beach, Florida; children, Cassandra Jean (Donny) Gilsdorf of Phoenix, AZ, Curtis Keith (Lisa) Carby of Batavia, Lynn Marie (Richard) Orze of Carol Stream and Lisa Ann (Curtis) Carby of Batavia; five grandchildren, Anthony, Cassidy, Stephanie, Eric and Zachary; a brother, Robert (Sue) Carby of Bloomington; a sister, Karen (Bob) Hurley of Petersburg, Illinois; and many nieces and nephews. Willard is preceded in death by both parents, two nieces and a great nephew. A private family celebration of life with Military Rites will be held at Law Jones Eastland in Lanark, Illinois. Friends may watch the service live online at https://www.facebook.com/groups/554075576100022/ at 11:00 a.m., Saturday, June 11, 2022 or watch the service through the link at a later date.

Willard Louis Carby, Jr., age 79, of Lake Carroll, Illinois passed away suddenly from natural causes at his home in Lake Carroll Wednesday, May 11, 2022. He was an inspiration to his family and friends, always caring, giving of himself, and... View Obituary & Service Information

A Life To Remember

Send flowers to the Carby family.