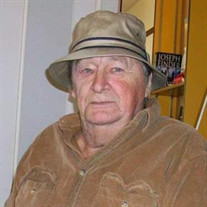 Wesley C. Johnson, age 77, formerly of Green Island, IA and Clinton, IA, passed away at Iowa Veteran’s Home, in Marshalltown, IA, where he resided for the last 15 years, on Tuesday, June 22, 2021. A graveside memorial service will be held at 10am on Monday, June 28, 2021, at Sterling Cemetery in rural Sabula, IA. Family and friends are welcome to attend the service. Wes was born April 7, 1944, in Savanna, IL, the son of Clifton and Hazel (Gruhn) Johnson. He grew up in Green Island, and graduated from Miles High School. After high school, Wes joined the United States Army and proudly served his country during the Vietnam War. Following his honorable discharge from the Army, Wes married Ardith Rosenow. The couple went on to have three children. Together they lived on their family farm. Wes also worked for Clinton Corn, among others. In his free time Wes loved to hunt, fish, search for morrels, and do just about anything outdoors. In his later years, he found immense joy in his grandchildren. He followed their lives with loving interest, and cherished time spent with them. It was a recurring theme that if one of his grandchildren mentioned a fondness for one of his possessions, he’d happily make sure it made its way home with them. Wes was a truly caring and giving man, whose unselfishness and kindness will be remembered fondly by many. Wes will be dearly missed by his son, Lonnie Johnson, of Des Moines, IA; daughter, Candi (Troy) Withee, of Des Moines, IA; and grandchildren, Nick and Grace Withee. He is preceded in death by his parents, Clifton and Hazel; daughter, Connie (infant); former wife, Ardith; and sister, Joyce Johnson.

Wesley C. Johnson, age 77, formerly of Green Island, IA and Clinton, IA, passed away at Iowa Veteran&#8217;s Home, in Marshalltown, IA, where he resided for the last 15 years, on Tuesday, June 22, 2021. A graveside memorial service will be... View Obituary & Service Information

The family of Wesley C. Johnson created this Life Tributes page to make it easy to share your memories.

Send flowers to the Johnson family.