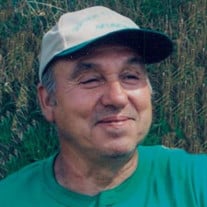 Walter “Tiny” Lee Minton was called home to his Lord and Savior on May 30th, 2022 at 6:06 am at the age of 78, at his home in Thomson, surrounded by his family after a lengthy battle with cancer. He was born February 6th, 1944 to William “Bill” Minton and Ruth (Rambo) in Russell County, Virginia. He married the love of his life and the woman who stayed by his side through think and thin, Wanda Ellen Minton (Gunter), on August 30th, 1976 after knowing her since they were little kids. They have one daughter together, Michelle Holman, of Fulton. Walter worked at Johnson Controls in Geneva until his retirement. Shortly after, he moved to Thomson to enjoy his retirement and be close to all the things he loved to do. Wally was a true outdoorsman his whole life. He could always be found outside or tinkering in his garage to pass the time when he wasn’t out chasing monster whitetail deer, or whatever happened to be out biting on the water. He loved his garden, spending countless hours getting his feet dirty while caring for his thriving vegetables. Too often his wife had to chase behind with a mop as he left a muddy trail through the house. Everyone who met him loved him. He could not go anywhere without running into someone he knew and would always make it a point to stop and talk with them. Even if he didn’t know you, he would strike up a conversation, making you feel like you were best friends by the end of it. He always had a corny (sometimes dirty) joke to tell, or a farfetched hunting and fishing story. He was so thankful for his dearest friend, Orlynn “Opie” Hurt of Thomson for always helping him and going out of his way to do anything that was needed, never asking for anything in return, except his friendship. Those which he loved more than anything in the world, are his three beloved grandchildren. Klarissa Truemper of Mt. Carroll, Kristin Truemper of Rockfalls, and Daniel Holman of Fulton. He would do anything for them and always was their biggest supporter. He was proud of all three grandkids and made it a point to remind them any chance he had. He helped them celebrate their achievements and picked them up when needed. No matter what, they knew grandpa would always be there through thick and thin with them. Walter will be dearly missed by his devoted wife, Wanda Minton; daughter Michelle (Curtis) Holman; grandchildren Klarissa Truemper, Kristin Truemper, and Daniel Holman; brothers, Billy Minton of Aurora, IL, and Bud Minton of Baltimore, MD; sisters-in-law, Mary Gurley of Southern Pines, NC and Cora McMillion of Alderson, WV, as well as one brother-in-law, David Gunter of Peterstown, VA. He has countless extended family from all over that will keep him forever in their hearts, as well. Walter is preceded in death by his parents, Bill and Ruth Minton, as well as his sisters, Shirley Dalton of Greenville, Mo and Shelby Rose of Dante, VA, and one brother Bobby Minton of Greenville, MO. Law Jones Funeral Home will be handling cremation per his request. A celebration of life will be held at the home Walter and Wanda shared at 5156 Riverview Circle Drive Thomson, IL 61285 from 11:00 a.m. – 5:00 p.m., Saturday, June 4, 2022, in which all are welcome to join. Please dress casually. Pastor Tim Yoder from Mt. Carroll Church of God will be speaking at noon. We will be having lunch catered in. He always loved gatherings at the house and would want everyone to get together and celebrate over him being at peace.

The family of Walter "Tiny" Lee Minton created this Life Tributes page to make it easy to share your memories.

Walter “Tiny” Lee Minton was called home to his Lord and Savior...

Send flowers to the Minton family.