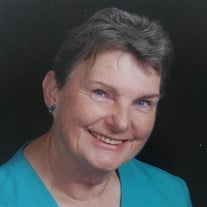 Virginia Kolwey, of Silvis, IL, passed away Tuesday, March 17, 2020, at New Perspective in Silvis. A visitation will be held from 9 a.m. to 12 a.m. Wednesday, March 25, At the Law-Jones Funeral Home in Savanna, IL. A private Funeral Mass will be held at 12 a.m. at St Johns Catholic Church in Savanna. Virginia was born August 27th, 1938, daughter of Raymond and Dorothy (Wise) Pixley. She moved to Savanna during her teen years after her father bought a farm just outside of town. Virginia graduated from Savanna High School with the class of 1956. After high school, she would meet her future husband Harry Schnitzler, the driver of her younger sister’s school bus. The couple married on May 27th, 1957. They raised seven children together, and celebrated 23 years of marriage until Harry’s passing in 1980. It would be 20 years before Virginia found love again. In 2000 Virginia met Kenneth Kolwey during an evening out square dancing. The two married in August 2001, and together celebrated 16 years of marriage until Ken’s passing in 2017. Virginia was a dedicated mother, and made her children the center of her life. She stuck by her kids to a fault, they could do no wrong in her eyes. She was hard working and full of energy. Virginia had a love for ceramics and turned that love into a ceramics shop where she would teach classes. Her children grew up making greenware molds for the various vases, bowls, and other goods she would create. Virginia’s faith was an important part of her life. She was an active member of her church community. Virginia will be dearly missed by her seven children, Debbora Schnitzler, William (Kathy) Schnitzler, David (Andrea) Schnitzler, Travis (Renee) Schnitzler, Matthew (Ty) Schnitzler, Blair (Joyce) Schnitzler, and Eric (Jennifer) Schnitzler; twenty five grandchildren and 22 great-grandchildren; three sisters, Georgia Schnor of Belvidere IL, Dorothy (Larry) Fox of Cedar Rapids IA, and Jean (Paul) Hertensen of Florida; and one brother, Raymond Pixley of Texas. Virginia is preceded in death by her husband Harry as well as her husband Ken; parents Raymond and Dorothy; sister Sue; and her infant twins John and Raymond.

Virginia Kolwey, of Silvis, IL, passed away Tuesday, March 17, 2020, at New Perspective in Silvis. A visitation will be held from 9 a.m. to 12 a.m. Wednesday, March 25, At the Law-Jones Funeral Home in Savanna, IL. A private Funeral Mass... View Obituary & Service Information

The family of Virginia Kolwey created this Life Tributes page to make it easy to share your memories.

Send flowers to the Kolwey family.