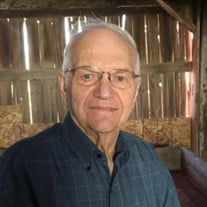 Virgil Handel, age 87, of Bloomington, Illinois, previously of Mt. Carroll, Illinois, passed away Saturday, March 13, 2021 at the OSF Richard L. Owens Hospice Home in Peoria with his loving family by his side. In lieu of flowers, memorials may be made to OSF Richard L. Owens Hospice Home in Peoria, Illinois; the Mount Carroll Church of God in Mount Carroll, Illinois; and The ARC Activity and Recreation Center in Normal, Illinois. Due to the current state of the pandemic, the family has postponed the celebration of life service until further notice. Virgil was born May 19, 1933, in Chadwick, Illinois, the son of Boyd and Irene (Stein) Handel. He attended Pleasant Hill Country School and graduated from Chadwick High School with the Class of 1951. Virgil enlisted in the US Army and served from 1954-1956 during the Korean War. On June 27, 1954 Virgil married Janalee Zillhart, in Mount Carroll, Illinois and celebrated sixty-six years of marriage. Virgil was a life-long farmer near Chadwick, serving on the Carroll County Livestock Feeders Board and also on the Chadwick School Board. He and Jan also drove truck for Schneider National for several years. Virgil operated a lawn mowing and handyman service in Mount Carroll in his retirement years. He and Jan were members of the Church of God in Mt. Carroll, where he was part of the Deacon and Building Committee. When they moved to Bloomington, they attended Grace Church in Normal, Illinois. Being near family was most important and they especially enjoyed spending time with their grandchildren and great-grandchildren. Virgil will be dearly missed by his wife Janalee of Bloomington; three daughters, LeAnn (Phil) Korty of Avon, Indiana, Lori (Wes) Wittmus of Rockton, Illinois, and Dianne (Dale) Simpson of Normal, Illinois; five grandchildren and five great-grandchildren. Virgil is preceded in death by his parents, Boyd and Irene Handel, and son David.

Virgil Handel, age 87, of Bloomington, Illinois, previously of Mt. Carroll, Illinois, passed away Saturday, March 13, 2021 at the OSF Richard L. Owens Hospice Home in Peoria with his loving family by his side. In lieu of flowers, memorials may... View Obituary & Service Information

The family of Virgil Handel created this Life Tributes page to make it easy to share your memories.

Send flowers to the Handel family.