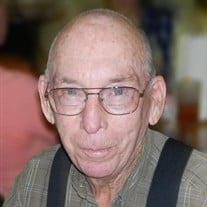 Victor George Camp, age 87, of Elvira, Iowa and Elberta, Alabama, passed away Friday, September 25, 2020 at Westwing Place Nursing Home, DeWitt, Iowa. A visitation beginning at 9:30 a.m. with service at 11:00 a.m. Friday, October 2, 2020 at Elvira Zion Lutheran Church, Elvira, Iowa. Burial will take place in the Elvira Cemetery with Military Rites accorded by the Preston American Legion. Memorials may be made in Victor’s honor for the Elvira Zion Lutheran Pantry in Elvira and the Grace Lutheran Pantry in Gulf Shores, Alabama. Masks and social distancing practices will be required. Victor's service will also be livestreamed on the Law-Jones Facebook Page for anyone who cannot attend. Victor was a loving husband, dad, grandpa and great-grandpa. He shared his deep faith with his wife, Joyce and his family. The communities he lived in, knew him as generous and always willing to help a neighbor. If you asked him what he did for a living, he would say, “I’m just a farmer.” Victor was born December 8, 1932, in Davenport, Iowa, the son of Harry and Loretta (Dietz) Camp. He grew up farming and at the age of nine was already pretty good at milking. His family moved to the Preston area when he was in the seventh grade, and that is where he met his future wife, although they didn’t hit it off right away. Victor graduated from Preston High School with the Class of 1951, and by this time, he and Joyce became an item, as they enjoyed riding in his car. Victor enlisted in the US Navy during the Korean War. He served supporting Pilot Training at Corpus Christi, Texas, rigging parachutes and helping maintain aircraft. In 1954, Victor took leave and returned home to marry Joyce Schmidt on February 14 at St. John’s Lutheran Church, Preston. After his service, they returned to Preston, Iowa to farm, buying a farm in Elvira in 1961. They raised five children and celebrated sixty-six years of marriage. Victor was a member of Elvira Zion Lutheran Church in Elvira and Grace Lutheran Church in Gulf Shores. He is a past President of the Northeast School District and was instrumental during consolidation. Victor and Joyce enjoyed being with family and friends, both in Elvira and Gulf Shores. Victor will be dearly missed by his wife Joyce of Elvira; two sons, David (Armgard) Camp of Greenville, South Carolina and Scott Camp of San Diego, California; two daughters, Laura (James) Van Pietersom of Green Bay, Wisconsin and Victoria (Douglas) Langfeldt of Summerdale, Alabama; 4 grandchildren, Bryan (Carly) Langfeldt, Austin (Heather) Langfeldt, Lindsey Van Pietersom and Spencer Van Pietersom; three great grandchildren, Ella, Ava and Ava; a brother Gene (Marcia) Camp of Preston; three sisters, Shirley (Harold) Losby of Iowa City, Donna Heckmann of Miles, and Patricia Dale of Pine, Arizona. Victor is preceded in death by his parents Harry and Loretta; a son Brian in 1983; and his sister Bernice Micheals.

The family of Victor George Camp created this Life Tributes page to make it easy to share your memories.

Send flowers to the Camp family.