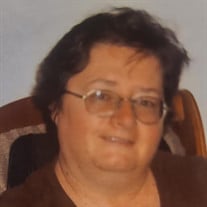 Vickie Trybus, 66, passed away January 6th surrounded by her loving son and daughter in Mt. Carroll. A memorial visitation will be held Tuesday, January 12, 2021 from 4pm to 7pm at Law Jones Funeral Home, in Savanna, IL. Vickie was born on May 31st, 1954 to Junior (Pat) Thomas Gilbert and Cecelia (Poppy) Mae (Parker) in Morrison IL. She graduated Savanna High School in 1974. Vickie moved into Chicago for a few years and returned to Savanna in 1985. Vickie was a devoted loving mother to Vincent and Samantha. She loved going for rides with her mom; especially when they were going to Shivers or Dairy Queen for ice cream. She adored her three grandchildren, Colin, Rylie, & Parker and enjoyed doing puzzles and playing games with them. Vickie truly enjoyed spending time with her family and friends. She always loved getting together with everyone, especially Halloween, it was her favorite holiday. Her goal in life was to spend as much time with her grandchildren when she retired. Vickie was employed at Swiss Colony from 1985-1990 after she moved back to Savanna. In 1990 she was employed by Elkay Manufacturing and worked there for 29 years when she retired in 2019. While she was employed at Elkay she worked in various departments such as, Sheet Metal, Mounting Boxes, and Valves. She was very well known around the factory by all. She enjoyed talking to everyone and made friends very easily. She retired Elkay on her birthday and had an amazing celebration with family and friends. Vickie was a very giving person. She was always donating to support a cause or always trying to help someone out. She will be remembered for having a heart of gold! In her free time when she was not riding around with her mom or spending time with her grandchildren she enjoyed doing puzzles, reading books, sewing and crocheting. She also enjoyed spending time outside gardening, creating her fairy garden, or swinging on her swing. Vickie will be dearly missed by her son, Vincent (Jessica) Trybus of Savanna IL; daughter, Samantha (Steven) Whiting of Thomson IL; three grandchildren, Colin & Rylie Trybus and Parker Whiting; her mother, Cecelia Gilbert of Savanna IL; six sisters, Karen Molinari of Rockford IL, Pamela (Sal) Mendez of Savanna IL, Doreen (Butch) Miller of Savanna IL, Gail Ann Themas of Savanna IL, Kim (Jeff) Knouse of Savanna IL, Cecelia Gilbert of Savanna IL, one brother Thomas (Barb) Gilbert of Mt. Carroll IL, and one brother in law Matthew Altensey of Savanna IL. Vickie was preceded in death by her father, Junior Gilbert; four sisters, Marilyn Altensey, Marie Sue Gilbert, Claudia Ann Gilbert, and Cathy Koeller, two nephews, Michael Paul Altensey and Austin Eagle, one cousin Sheryl Hamm, both sides of grandparents, and several aunts and uncles.

Vickie Trybus, 66, passed away January 6th surrounded by her loving son and daughter in Mt. Carroll. A memorial visitation will be held Tuesday, January 12, 2021 from 4pm to 7pm at Law Jones Funeral Home, in Savanna, IL. Vickie was born on... View Obituary & Service Information

The family of Vickie L. Trybus created this Life Tributes page to make it easy to share your memories.

Vickie Trybus, 66, passed away January 6th surrounded by her...

Send flowers to the Trybus family.