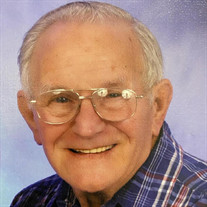 Vernon Popkin, age 95, of Savanna, IL, passed away Friday, September 4, 2020 at Allure Nursing Home in Mt. Carroll, IL. Family and friends are invited to share in Vern's life at lawjonesfuneralhome.com. Vernon was born February 15, 1925, in Morrison, IL, the son of John and Louise (Rosenow) Popkin. After graduating from Morrison High School, he got a job at a factory as a general molder, where he built the molds used for production. He then went on to purchase land in Mt. Carroll, where he farmed for a number of years. On December 23, 1960, Vernon married Bernice Butt, in Lanark, IL. Together they raised four children, and remained by each-others' side for almost 60 years. Ultimately he found his passion, owning and operating Sun Valley Cab for 49 years; finally retiring in 2015. Vern loved driving that cab! He cared about people and genuinely enjoyed talking with them on their trips. When Vern wasn't working, he had quite the affinity for athletics. In his younger years, he was a local boxing champion, and he was one of the biggest baseball fans you ever knew, playing and watching whenever he had an opportunity. He loved watching his Cubs, but his greatest love for sports, came when watching his kids, and later grandkids, play and compete. Vernon also had a musical side to him. He played the mandolin, harmonica and banjo. In fact, He and Bernice would play together, regularly performing at church and at Big Meadows Nursing Home, in Savanna. Vern will be dearly missed by his beloved wife, Bernice; children, Dottie Breitbach, of Savanna, Karl (Nicole) Popkin, of Savanna, and Vinnie (Wendy) Popkin, of Savanna; seven grandchildren; 7 great-grandchildren; a brother, Arnie Popkin, of Morrison; a sister, Nancy McCallister, of Rock Falls, IL; as well as many extended family members and friends. He is preceded in death by his parents, John and Louise; son, Roger Butt; son-in-law, Steve Breitbach; three brothers, Raymond Popkin, John Popkin, and Alvin Popkin; and a sister, Betty Harriage.

The family of Vernon Popkin created this Life Tributes page to make it easy to share your memories.

Send flowers to the Popkin family.