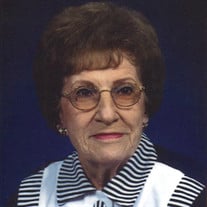 Verena Helen “Pat” Uhl, age 101, the loving Matriarch of her family, passed away peacefully at the Elizabeth Nursing Home on Wednesday, March 18, 2020. A private service will be held with burial in St. Mary’s Catholic Cemetery, Elizabeth. A public Memorial Mass will be held later in the summer at St. Mary’s Church in Elizabeth to honor Pat’s life. It all started when a baby grand piano was left in a house Pat and her family moved into, she learned how to play at a young age. Pat teamed-up with her father who played the fiddle, to entertain and earn a few bucks for their family during the Great Depression. Pat found that the constant in her life was music, and it made all the difference. She was born January 11, 1919 in Centralia, Iowa, the daughter of Peter and Caroline (Schwendinger) George. The family relocated to Farley, Iowa where Pat attended St. Joseph Catholic Grade and High School, graduating in 1936. Soon after, Pat responded to an ad in the paper, for a housekeeper in Scales Mound, Illinois, earning 50 ¢/week. It was there that Pat met and married Edward “Eddie” Uhl on January 22, 1938 at St. Joseph Catholic Church in Apple River, Illinois. They eventually moved to a farm near Elizabeth. It is there that they raised five children and celebrated thirty-seven years of marriage until Edward’s death on May 10, 1975. During their marriage, She and Eddie played for many local dances and weddings in their band, Eddie and the Ranch Hands, and later, Eddie Uhl and the Country Girls. They did this for so many years that they would often play for weddings of the children of couples that they played for in the past. Pat was a devout Catholic her entire life, and was active in many activities, including the Altar and Rosary Society, teaching Sunday school at St. John Parish in Savanna, and visiting and taking Holy Communion to residents of the Elizabeth Nursing Home. Pat volunteered at the fair and many blood drives in Elizabeth and was a member of the Livestock Club. Pat will be dearly missed by a son, William (Gayle) Uhl of Lewis Center, Ohio; daughters, Marilyn Berlage of Elizabeth, Patricia (Randy) Krohmer of Evergreen Park, Illinois, and Mary (Scott) Lafferty of Village of Golf, Florida; a son-in-law, Tony Chunes of Springfield, Illinois; 12 grandchildren; 29 great-grandchildren; 8 great-great-grandchildren; and many nieces and nephews. Pat is preceded in death by her husband, her parents, three brothers, Francis Edwin and Alvin; two sisters, Louise Milzarek and Rita Jobgen, a daughter, Marlene Chunes; a son-in-law, Kenneth Berlage; two infant sons, Thomas and Robert; and great-grandson, Zachary Uhl.

Verena Helen &#8220;Pat&#8221; Uhl, age 101, the loving Matriarch of her family, passed away peacefully at the Elizabeth Nursing Home on Wednesday, March 18, 2020. A private service will be held with burial in St. Mary&#8217;s Catholic Cemetery,... View Obituary & Service Information

The family of Verena Helen "Pat" Uhl created this Life Tributes page to make it easy to share your memories.

Send flowers to the Uhl family.