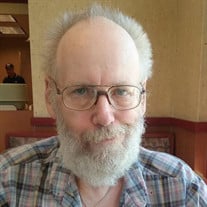 Thomas Charles Sorensen, 66,of Savanna,Illinois and formerly of Bruce, Wisconsin passed away suddenly Tuesday May 19, 2020 at Rock River Hospice and Home in Sterling, Illinois after a very short battle with leukemia. Tom was born August 2,1953 in Clinton,iowa in Jane Lamb Hospital to Marion (Bud) and Mary (Jane) Sorensen. He lived in Bruce, Wisconsin from 1961 until around 1980 when he moved back down to Iowa. He married Marlene Skow in 1990. They had one daughter, Charlene. They lived in Savanna, Illinois from 1990 to present. Tom had many jobs through the years that he took pride in and enjoyed the ham Amateur radio club,hunting, break and fixing things and telling stories to anyone who would listen. He was a man like no other, a excellent brother and father with a ready smile and quick sense of humor. Tom is survived by his wife Marlene, of Savanna, Illinois his daughter Charlene, of Lanark,Illlinois his sister Dale of Maquoketa, Iowa, his sister Grace(Gus)Turner of Ladysmith, Wi, his brother Daniel of Weyerhauser, Wi, his sister Lori (Jeff) Dennison of Savanna, Ill, his sister Carol(William) Powell of Ladysmith, WI, his sister Ginny(Steve) Wilson of Arkdale, WI, and his brother Chuck (June) of Savanna, Ill. many nieces, nephews, great nieces and nephews, cousins and one aunt. He was preceded in death by his parents, Bud and Jane Sorensen, his in-laws Bill and Jean Skow, his sister Cyndi Jennerman and brother-in-law Daniel Turner. Cremation rites have been arranged but due to Covid 19 restrictions there will not be a formal funeral, however there will be a celebration of life at a later date. Condolences can be sent to Law Jones in care of Charlene Sorensen.

Thomas Charles Sorensen, 66,of Savanna,Illinois and formerly of Bruce, Wisconsin passed away suddenly Tuesday May 19, 2020 at Rock River Hospice and Home in Sterling, Illinois after a very short battle with leukemia. Tom was born August 2,1953... View Obituary & Service Information

The family of Thomas Charles Sorensen created this Life Tributes page to make it easy to share your memories.

Send flowers to the Sorensen family.