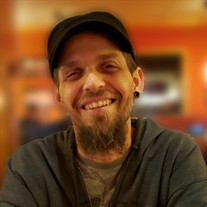 Thomas W. Downing, age 40, of Savanna, IL, died tragically in an automobile accident Sunday, September 6, 2020, near Thomson, IL. A memorial gathering will be held from 3pm to 6pm, Tuesday, September 15, 2020 at Law Jones Funeral Home in Savanna. Tom was born December 13, 1979 in Geneva, IL, the son of Robert and April (Ludwig) Downing. He grew up in Hinckley, IL, graduating from Hinckley High School. After high school, Tom moved to the Dixon/Sterling area for a short spell, before working for a ranch in Hanover, IL. He then made his way to Savanna, working for Kaatz Bros. Lures, and currently, Elkay Manufacturing. On October 13, 2018, Tom married Dakota Carlisle. Tom was a good-hearted man with a great sense of humor. He always had a playful spirit with those he loved. It was common for him to embarrass his family with his jokes and silly demeanor. That, and fireworks! If there was a way to blow it up, Tom was in! He truly was a kid at heart, something that was infectious to those around him. Tom’s favorite hobbies also included cooking/baking, and just about anything outdoors. He loved to hunt, fish, and camp. Tom was quite the chef, and he was famous for his homemade cheesecakes. It is not an opinion, but rather a fact, that his were the “best ever.” Tom will be remembered for many things, but the most profound, will surely be his love of his family. All of Tom’s favorite pastimes; cooking, being outdoors, and acting like an overgrown child (we promise we mean that endearingly!), were made better by sharing them with his wife and children. Tom will be dearly missed by his wife Dakota; children, Alynna Downing, Madalynn Downing, and Tommy Downing, Jr.; parents, Robert and April Downing; and many extended family members and friends.

The family of Thomas W. Downing created this Life Tributes page to make it easy to share your memories.

Send flowers to the Downing family.