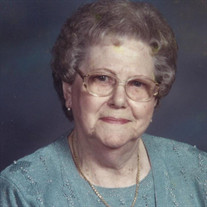 Thelma T. (Boynton) High, age 98 years, passed away with her family at her side on February 7th, 2021, at Mercy One Clinton Medical Center, Clinton, Iowa, due to complications of the COVID-19. Private services will be held at a later date. She will be buried alongside her husband at the Danville National Cemetery in Danville, Illinois. The Savanna Law-Jones Funeral Home is in charge of arrangements. Memorials can be made to the Muscular Dystrophy Association or a charity of your choice. Thelma was born on June 25th, 1922, in Willow, Oklahoma to Lillie Inez (Matthews) and John Douglas Boynton. She married Fred L. High Sr. on January 5th, 1943, in Pecos, Texas. They were married 55 years until his passing on March 10th, 1998, in Danville. Following graduation from Ocina, Oklahoma High School, Thelma worked as a civil employee at Pecos (TX) Air Base. After moving to Danville in 1944, she then worked as a lab assistant in the engineering department of General Electric until she retired in 1977. Thelma enjoyed her years as Treasurer of Dan G.E. where she made many friends. She worked every Labor Day for the Muscular Dystrophy Telethon. Her faith and Christian values were a part of her daily life, and while in Danville she was an active member of the Faith Baptist Church. Thelma was a true sports fan often yelling enthusiastically for her Chicago Cubs and the Fighting Illini. She was particularly thrilled with the 2016 Cubs and their World Championship. She loved sewing, reading, doing ceramics, and traveling. Her most precious memories were the Cousins’ Family Reunions every two years where the generations would gather to celebrate ‘the family’. Thelma was a kind person who loved everyone. She especially enjoyed the times spent with her grandchildren and great-grandchildren. During her later years, her friends at Pinnacle Place earned a special place in her heart. Survivors include one son, Fred L. (Barbara) High Jr. of Savanna; two grandchildren, Jennifer (Greg) Peters of Smithville, MO, and Ryan (Amy) High of Mt. Horeb, WI; six great-grandchildren, Grace, Faith, Joy and Colt Peters and Noah and Lucas High. She is also survived by her niece Sue McCoy, niece-in-law Sharon (James) Harbeson, and nephews, Harold (Neggie) McCoy, Don (Linda) McCoy, Dale (Jeanette) Cornelius, Ray (Mary) Tatyrek, and Ken (Jan) Tatyrek. Thelma is preceded in death by her parents; husband; sisters Ruth (Curt) Cornelius, Dorothy Lee (S.A.) Shook, and Mildred (Ernie) Tatyrek; and nephew, Danny Cornelius.

Thelma T. (Boynton) High, age 98 years, passed away with her family at her side on February 7th, 2021, at Mercy One Clinton Medical Center, Clinton, Iowa, due to complications of the COVID-19. Private services will be held at a later date. She... View Obituary & Service Information

The family of Thelma T. High created this Life Tributes page to make it easy to share your memories.

Send flowers to the High family.