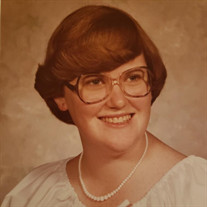 Terry Jo Dykema, age 61, of Milledgeville, previously of Chadwick and rural Thomson, passed away peacefully Sunday, April 11, 2021 at home. She was a loving Wife, caring Mom and doting Grandma. A private family graveside service will be held at the Chadwick Cemetery. Terry was born January 26, 1960 in Kodiak, Alaska at the Naval Station, the daughter of Elmer and Joanne (Winkel) Ferris. The family moved around to follow Elmer’s Navy career, taking them to Minnesota, California and finally to Savanna. Terry attended Savanna schools graduating with the Class of 1978. After high school she worked at the Savanna Army Depot. Terry found the love of her life, Arlyn Dykema who grew up near Thomson. They were married February 14, 1981 in Savanna at the Community Church of Christ. Terry and Arlyn raised three children and celebrated forty years of marriage. Terry mostly enjoyed the satisfaction of watching her grandchildren dance and play. A highlight was attending the Grandparents Tea event at their school. She also enjoyed the title of “Pancake Queen,” cooking large family meals, and baking her scrumptious treats including cakes, cookies, and brownies. She liked movies that made her cry, especially on the Hallmark channel. Diet Pepsi was her drink of choice and Pizza Hut was her favorite place to eat. The simple things in life meant the most. Supporting her children’s dreams and spending time with her husband Arlyn provided the fabric of her life. Terry will be dearly missed by her husband, Arlyn Dykema of Milledgeville; two daughters, Jessica (Aaron) Weires of Chadwick and Caitlin Dykema of Mt. Carroll; her son, Ryan Dykema of Sterling; three grandchildren, Lillian, Reid and Jax; and a brother, Mark Ferris of Chadwick. She is preceded in death by a son at birth, Joshua James; a grandson at birth, James Michael Weires; and both parents.

The family of Terry Jo Dykema created this Life Tributes page to make it easy to share your memories.

Send flowers to the Dykema family.