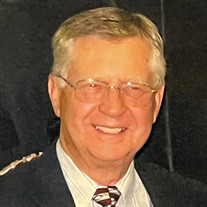 Terrence “Terry” Derdzinski, loving Husband, Father, Grandfather and Great-grandfather, passed away Sunday, February 27, 2022 at home in Lake Carroll. The last chapter of Terry’s life went just the way he would have wanted, living at home with the love of his life, Dolores. Terry was born August 25, 1938 in Chicago, the first child of Edmund and Genevieve (Gil) Derdzinski. The 1940s and 50s were an exciting time to grow up in Chicago, and Terry saw all kinds of possibilities as he graduated from St. Ignatus High School with the Class of 1956. He attended DeVry Tech and specialized in Mechanical Engineering. On May 25, 1963, Terry married Dolores Marie Bagrowski at Blessed Agnes Catholic Church, Chicago. They celebrated fifty-eight years of marriage and raised three sons, Alan, John and Michael. Terry’s career in technology involved working with the flip-phone, highway emergency phones, and police dispatch consoles. He worked 32 years for Motorola, moving his family from Addison, Lake In The Hills to Fox River Grove. In Addison he also worked with the Village and the Jaycees. With the same dedication that he spent in his career, in retirement Terry spent his talents helping to make his community of Lake Carroll a better place to live. He was on the Infrastructure Committee and they called him the “Road Zar.” He was proud to be a part of the group that built the Lake Carroll Swimming Pool. Terry and Dolores are members of St. Thomas Aquinas Catholic Church of Freeport. He was also a Knight of Columbus member. Wherever Terry and Dolores lived, they became part of the community and contributed to making it a better place. Terry will be dearly missed by his wife, Dolores of Lake Carroll; three sons, Alan (Debra) Derdzinski of Belvidere, John Derdzinski of Freeport and Michael Derdzinski of Freeport; three grandchildren, Aaron (Alli) Derdzinski, Ashley Mae and Alec Derdzinski; and two great-grandchildren, Leo and Rylie Mae. Terry is preceded in death by both parents; a sister and brother-in-law, Carol Jean and Louis Sobek; two brothers-in-law, Leonard and Thomas (Karen) Bagrowski; and mother and father-in-law, Leo and Mary Bagrowski. A Funeral Mass will be held 11:00 am, Friday, April 8 at St. Thomas Aquinas Catholic Church in Freeport, Illinois, followed by a luncheon gathering to celebrate Terry’s life.

The family of Terrence (Terry) Derdzinski created this Life Tributes page to make it easy to share your memories.

Send flowers to the Derdzinski family.