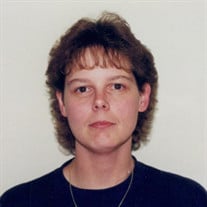 Tamara “Tammy” Lynn Robertson, 58, of Fulton, passed away Tuesday, May 10 at the University of Iowa Hospital. Tammy was born on February 29, 1964 in Wabash, Indiana, the daughter of Linda (Ford) and Bascom Hunt. Previously from Savanna, IL, she worked at Elkay Manufacturing Company as an assembler. It was there that she met Michael “Mike” Robertson and they went on to marry in 2000. For the past twenty-six years, they stayed each other’s best friends, creating a beautiful life together, and four children: Amber, Danae, Amanda, and Kayla. Tammy was passionate about caring for her husband, children, and grandchildren. She enjoyed cooking for anyone who would let her. Additionally, she was fond of keeping up with the work of the household and the many animals she and Mike acquired over the years. Most recently, she and their dog, Jasper, spent their days completing diamond paintings and playing games on her IPad at their new home. Tammy made sure that her grandchildren, all 8 of them, never went without recognition. Each visit they made she was sure to greet them with a hug and say farewell with one too. She was a lover of hugs. Survivors include her husband, Mike Robertson; four daughters Amber (Brian) Boyer of Savanna, Danae Rubio of Savanna, Amanda (Nathan) Robertson of Fulton, and Kayla (Cory) Robertson of Davenport; eight grandchildren Jalea, Adam, Ariana, Nicole, Drake, Alyssa, Isabella, and Easton, one brother, Ronald Hunt of Phoenix, Arizona. Tammy is preceded in death by her mother, Linda Hunt; father, Bascom Hunt; brother, Terry Hunt; and both her mother-in-law, Mary Robertson; and father-in-law, Gilbert Robertson.

Tamara &#8220;Tammy&#8221; Lynn Robertson, 58, of Fulton, passed away Tuesday, May 10 at the University of Iowa Hospital. Tammy was born on February 29, 1964 in Wabash, Indiana, the daughter of Linda (Ford) and Bascom Hunt. Previously from... View Obituary & Service Information

The family of Tamara L. Robertson created this Life Tributes page to make it easy to share your memories.

Send flowers to the Robertson family.