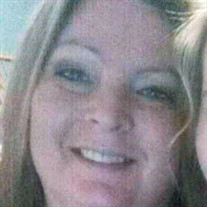 Tamara S. Balk, age 55, of Thomson, IL, passed away on September 15, 2020 at University of Iowa Hospital in Iowa City, IA. A celebration of Tammy’s life will be held on a later date. Family and friends are invited to share in Tammy’s life at lawjonesfuneralhome.com. Tammy was born November 7, 1964 in Morrison, IL, the daughter of Raymond and Marilyn (Pease) Remrey. She spent most of her childhood in Thomson, IL, and attended Thomson High School. On September 28, 1996 Tammy married Jim Balk. Jim gained not only a bride that day, but three sons as well. He took in Tammy’s boys like they were his own. Jim and Tammy went on to have two daughters together. Tammy was a comforting and familiar face in her community. She worked at Casey’s General Store in Thomson, for 13 years, as well as at the Thomson Station for many more years. She also tended bar at numerous local establishments. Her official title there may have been bartender, but unofficially, she was a public psychiatrist. Tammy was one of the most caring people one would ever have the pleasure of knowing. She didn’t have a mean bone in her body, and had a beautiful, non-judgemental aura about her, that made her beloved by many. She treated her family, friends, and even complete strangers as though their problems were her own, and was always willing to lend an ear, and often-times a helping hand to those in need. Family was everything to Tammy. She bestowed a special kind of love upon her dear husband, her children, and her grandchildren. They quite literally meant the world to her, and she definitely made sure that they knew it. Her love extended beyond her family, as well. She was a proud member of the “Fab 4”, or at least that’s what they called themselves. She and her three best friends got together for girls’ nights out, wreaking havoc all over town. In her free time she enjoyed reading crime, mystery, and supernatural novels. She loved the fall season, especially the time around Halloween. Believe us, if she can find a way to come back as a prank-pulling ghost this Halloween, she will! Tammy also loved music. You could often hear her humming a tune, or playing her favorite tracks to accompany her mood. She was also quite the fan of WWE Wrestling. Now let’s be clear about something. Jim was her one true love. But, if there was a man who deserved second place, it was surely Dwayne “The Rock” Johnson. Tammy will be dearly missed by her husband, Jim; three sons, Robert Faust, of Thomson, IL, Shawn Faust, of Hanover, IL, and Jeffrey (Amaya Carter) Faust, of Fulton, IL; two daughters, Sami (Jordan Hoenicke) Balk, of Thomson, IL, and Shelby (Nicholas Barsema) Balk, of Thomson, IL; three grandchildren, Takoda, Mila, and Alexander; her mother, Marilyn Remrey; two sisters, Gina Phillips and Terri Bearsley; as well as many nieces and nephews. Tammy is preceded in death by her father, Raymond Remrey and her mother-in-law, Betty Balk.

Tamara S. Balk, age 55, of Thomson, IL, passed away on September 15, 2020 at University of Iowa Hospital in Iowa City, IA. A celebration of Tammy&#8217;s life will be held on a later date. Family and friends are invited to share in Tammy&#8217;s... View Obituary & Service Information

The family of Tamara S. Balk created this Life Tributes page to make it easy to share your memories.

Send flowers to the Balk family.