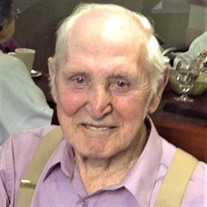 Sylvester “Scout” Tebbe, of Maquoketa, formerly of Spragueville, passed away Sunday, October 17 at Clover Ridge in Maquoketa. Funeral mass will be held Thursday, October 21, at 11:00 a.m. at St Joseph’s Catholic Church in Preston. Visitation will be from 8:30 a.m. to 10:45 a.m. prior to the service at the church. Scout was born September 21, 1926, son of John and Mary (Helme) Tebbe. He grew up on the family farm in Springbrook, taking care of livestock and milking cows. He attended Slab Town County School. Scout met the love of his life, Arlene Feller, at a dance at Melody Park outside of Preston. Scout and Arlene married on April 28, 1953. Together they raised nine children and celebrated 65 years of marriage until Arlene’s passing in 2018. Scout loved his family, farming, and the Cubs. He and Arlene enjoyed spending time with their children and grandchildren, playing cards, and dancing. One of Scout’s beloved possessions was his 656 International tractor. At the center of Scout’s life was his faith. He was an active member of St. Joseph’s Church in Preston, and a longtime member of the Knights of Columbus. Sylvester will be dearly missed by his nine children; Diane (Delbert) Klemme of Preston, Mary Ellen (Roger) Burken of Blue Hill, NE, Carol (Mitchell) Young of Youngstown, OH, Darrel (Dianne) Tebbe of Spragueville, Sharon (Roger) Johnson of Crawfordsville, IN, Charles (Jody) Tebbe of Spragueville, Lonnie Tebbe of Spragueville, Rose (Thomas) Yaddof of Preston, and Lou Ann (Doug) Paulsen of Durant, IA; 28 grandchildren 37 great-grandchildren, and many nieces and nephews. Sylvester is preceded in death by his wife, Arlene; grandson, Devon Yaddof; daughter-in-law Margie Tebbe; parents, John and Mary Tebbe; siblings, Elmer, Alfred, Johnny, Harold, Oliver, Richard, Rosella Sullivan, Armella Clasen, Lavita Budde, Rosemary Dondlinger, and Regina Clasen.

The family of Sylvester "Scout" Tebbe created this Life Tributes page to make it easy to share your memories.

Send flowers to the Tebbe family.