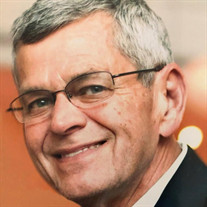 Steven Taylor Ritenour entered the world December 16th, 1948, into the family of Jerald and Camilla (Taylor) Ritenour. He attended Preston High School and majored in History at Simpson College. On December 7, 1974, he married Shirly Bormann and they began their family. He was a natural businessman, first selling insurance, then running the Hometown Cafe. Steve’s official team was the Yankees, but he admitted to being a secret Cubs fan. His favorite activities were catering, watching the Hawkeyes and spending time with his grandkids. His girls were a pride and joy to him, mostly because they gave him grandkids. Steve loved working for Preston. He was a huge supporter of the city, often hesitating to leave unless it meant seeing one of his six “perfect” descendants. He was mayor for over 12 years and was instrumental in establishing the Preston Manor. He made many friends through his participation in the Lions Club, Jaycees and by volunteering with both the Ambulance and Fire Departments. He also organized the Red Cross blood drive for several years. We’re positive Steve was welcomed to heaven by his mom, holding a plate of fresh cinnamon rolls, and his dad, a cold beer cracked and waiting. We’re hoping brother Rod had the boat all gassed up to take Steve for a ride, along with his grandparents and Mike Arlandson. Steve’s wife, Shirly, and daughters Heather Nolting & Beth (Scott) Johnson, will miss him terribly, along with his brother Kevin and wife Deb, his sister Ann, and sister-in-law Kathy. Peyton, Jaita & Taryn Nolting and Madeline, Gabriella, & Lucas Johnson will miss their Papa, but know he’s in a better place. Steve is also survived by several nieces, a nephew, and several great nieces & nephews. Services will be held Thursday, April 8th. Visitation is at Law-Jones Funeral Home in Preston, IA from 9-11 am with a memorial service following. Face masks and social distancing will be required. The family requests in lieu of flowers and memorials that donations be given to Preston United Methodist Church or to Hospice of Jackson County to thank them for their tireless work and patient attention to Steve, as well as their efforts toward all of us during this time.

The family of Steven Taylor Ritenour created this Life Tributes page to make it easy to share your memories.

Send flowers to the Ritenour family.