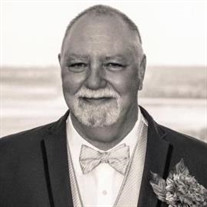 Stephen “Gator” Thayer, age 64, of Sabula, IA, passed away Monday, December 27th, at his home. Funeral service will be held at 2:00 p.m. Saturday, January 1st, at the Law Jones Funeral Home in Savanna, IL. Visitation will be from 12:00 p.m. to 2:00 p.m. Saturday, at the funeral home prior to the service. Burial will take place in the Evergreen Cemetery in Sabula. Steve was born August 1st, 1957. Son of Jackie and Evelyn (Hamilton) Thayer. At a young age Steve earned his nickname gator. When playing down by the river people would say “Hey Steve, what are you doing?” He would respond “I’m catching gators!” The nickname stuck with him his whole life. Steve attended Sabula High School, and graduated with the last graduating class in 1975. After school, Steve joined the army, and became part of the 82nd Airbourne. In a short amount of time Steve achieved the rank of Sargent. After leaving the army Steve returned to Sabula and married Teena Staver in 1983. Together the couple raised three children. When Steve returned to Sabula he changed occupations, from police officer at the Rock Island Arsenal to working for international paper in Clinton, IA, until he found his calling with the railroad. He worked for many different companies including, Milwaukee, Sioux Lines, and Canadian Pacific. For a time he operated the bridge leading trains past Sabula. In total Steve worked for the railroad for over 20 years. Steve loved the outdoors and the Mississippi River. When his kids were growing up, he’d take the family on trips up and down the river camping and fishing. Steve loved to hunt. He’d take multiple hunting trips throughout his life, including a trip to hunt Kentucky turkeys with his son, and a grand expedition hunting bears. His expertise though was duck hunting in the backwaters around Sabula. Steve was known for his bird calls, many times showing off his skills to his children in the living room. At one time, Steve was even an owl hooting champion. Most important to Steve was his family. He loved family breakfast at the Sandbar Grill, and especially loved the time he spent with his grandchildren. Steve also had a second family, made up of all his friends at the Sabula VFW. He went there almost every night to watch Wheel of Fortune, and spend time in good company. Stephen will be dearly missed by his four children, Stephen (Candace) Thayer of Sabula, Joshua (Bethany) Thayer of Savanna, Bobbi Jo (Dave) Cox of Preston, IA, and Gage of Sabula; seven grandchildren, Jaide, Jerzie, Jared, Jackson, Jagger, Jensen, and Evelyn; one great-granddaughter, Anastasia; and one brother, Don (Deb) Thayer of Sabula. Stephen is preceded in death by his parents, Jack and Evelyn, and his cousin, Stanley Allen Bullis.

Stephen &#8220;Gator&#8221; Thayer, age 64, of Sabula, IA, passed away Monday, December 27th, at his home. Funeral service will be held at 2:00 p.m. Saturday, January 1st, at the Law Jones Funeral Home in Savanna, IL. Visitation will be from... View Obituary & Service Information

The family of Stephen "Gator" Thayer created this Life Tributes page to make it easy to share your memories.

Send flowers to the Thayer family.