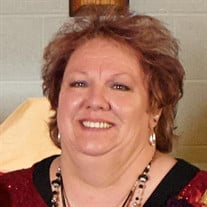 Stephanie (Brandenburg) Stamp, 60, of Goose Lake, Iowa, passed away on January 29 at the University of Iowa Hospital. Born on February 12, 1959 to Stephen and Rose Brandenburg, Stephanie was the eldest of 8 children. She married Neville Stamp on January 5, 1975. Stephanie liked to call herself a “Domestic Goddess.” Neville and Stephanie bought a house in 1980 that they spent many years remodeling – she was a great decorator. A seamstress at heart, Stephanie sewed many dresses from baby dresses to wedding dresses, and made quilts for every wedding, graduation, and baby born in her large family. Stephanie won several quilting contests, including the Spragueville Sesquicentennial and the national St. Jude’s Quilt of Dreams contest. Stephanie endeavored to learn a new craft each year, learning how to tat, crochet, and work with ceramics and stained glass. She was a fantastic cook, and hosted Christmas Eve dinner for her family each year. Stephanie was also a voracious reader. She was fantastic with plants, and could often resurrect them when they looked completely dead. She loved camping, first tent camping and later in a their camper. With practice Stephanie became quite skilled at cooking over the campfire. Stephanie worked for several years as a seamstress first with Roseanne’s in Miles and later as a tester and teacher for new notions that came out at Hancock’s Fabrics. Stephanie read the water meters in Goose Lake for several years. Stephanie was a member of Salem Lutheran in Spragueville in her early life, helping to lead the God Squad and helped with VBS, Sunday School, and the Christmas program. Later as a member of Ascension Lutheran Church she taught Preschool Sunday School and led the crafts portion of the Vacation Bible School, and along with her husband took confirmation students on camping retreats. She also did costuming for several plays and musicals at Northeast High School. Stephanie loved painting fingernails and toenails – her own and those of her granddaughters and nieces. She also was seldom seen without her signature big earrings and red lipstick. She liked to say she was, “part gypsy on my mom’s side.” Stephanie was preceded in death by her parents, one aunt and 4 uncles. She is survived by her husband, Neville, 4 children – Gerald (Lori) Stamp of DeWitt, Amanda (Grant) Applehans of North Branch, MN, Andrew (Kayla) Stamp of Delmar, and Tyler Stamp of Goose Lake, 8 grandchildren, 5 great-grandchildren, and her 7 siblings. Visitation will be held at Ascension Lutheran Church in Goose Lake on Thursday, February 6th from 5:00-8:00pm, and Friday, February 7th at 10:00am with an 11:00am funeral to follow.

Stephanie (Brandenburg) Stamp, 60, of Goose Lake, Iowa, passed away on January 29 at the University of Iowa Hospital. Born on February 12, 1959 to Stephen and Rose Brandenburg, Stephanie was the eldest of 8 children. She married Neville Stamp... View Obituary & Service Information

The family of Stephanie (Brandenburg) Stamp created this Life Tributes page to make it easy to share your memories.