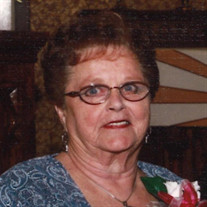 Shirley Ann Moothart, age 89, of Chadwick, IL, passed away on December 25, 2021 at Allure Nursing Home in Mt. Carroll, IL. A funeral service will be held at Law Jones Funeral Home in Lanark, IL, on Monday, January 10, 2022 at 10:30 am. Visitation will take place on Sunday, January 9, 2022 from 2pm to 4pm a Law Jones Funeral Home in Lanark, as well as one hour prior to Monday’s service. Burial will take place at Oak Knoll Cemetery, in Sterling, IL. Memorials may be given in Shirley's memory to Mercy Hospice. Services may be viewed live on Facebook: http://bit.ly/3JVtoTd Shirley was born March 11, 1932, in Tampico, IL, the daughter of George and Loretta (Peterson) Tuft. She graduated from Sterling High School and immediately went to work as a dental assistant in Sterling. On March 30, 1952, Shirley married Donald Moothart. They celebrated 64 years of marriage before his passing in 2016. Upon marrying Donald, Shirley and he began their family in Lanark, as Shirley settled into the role of homemaker. Then in 1956, they purchased what would become their family farm for the next six-plus decades. The young couple placed tremendous value in family life, as they raised their three girls. This love of all things family only seemed to strengthen as they were blessed with grandchildren and great grandchildren. Shirley and Donald were always an active couple. They tended to the time-intensive family farm, and always seemed to find time for socializing. They loved to go dancing, roller skating, and bowling, and would often gather with friends for a night of cards. As they grew older, many of these social events began to center around their grandchildren. Shirley and Donald attended every grandchild event and activities that they could. After her children were grown, Shirley began a career that would last more than twenty years, working for Jo Carroll Electric. In her down time, Shirley enjoyed cooking and baking; specifically, baking cakes for the Carroll County Fair, as well as sewing. Shirley will be dearly missed by her three daughters, Debra Stepp, Vickie (Jim) Zuck, and Penny (Mark) Swalve, all of Chadwick, IL; six grandchildren, Joshua (Kelly) Stepp, Nathan (Nicole) Stepp, Jason Zuck, Jenny (Carl) Lyons, Brock (Ashley) Swalve, and Courtney Swalve; nine great-grandchildren; and brothers-in-law, Gerald Moothart and Thomas Lehmann. Shirley is preceded in death by her parents, George and Loretta; husband, Donald; brothers, Jerry Tuft and George Tuft; and sister, Betty Lehmann.

Shirley Ann Moothart, age 89, of Chadwick, IL, passed away on December 25, 2021 at Allure Nursing Home in Mt. Carroll, IL. A funeral service will be held at Law Jones Funeral Home in Lanark, IL, on Monday, January 10, 2022 at 10:30 am. Visitation... View Obituary & Service Information

The family of Shirley Ann Moothart created this Life Tributes page to make it easy to share your memories.

Shirley Ann Moothart, age 89, of Chadwick, IL, passed away on...

Send flowers to the Moothart family.