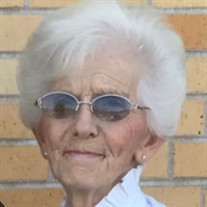 Shirley Ann Hadley, age 75, of Sterling, previously of Chadwick passed away Sunday, February 27, 2022 at Genesis Medical Center, Silvis. A graveside service will be held 2:00 pm Friday, March 18, 2022 at the Chadwick Cemetery. Shirley was born October 2, 1946 in Morrison, the daughter of Alexander and Dorothy (Dial) Brightman. She grew up on a farm, remembering fondly the time her saddle was loose and she slid off the horse. She is a 1965 graduate of the Chadwick High School. In 1968, Shirley married Fredy Hadley. They raised two children, Fredy, Jr and Tamela. Shirley was a stay-at-home Mom until the kids were out of school. Then she went to work in the parts department of Handle Implement, Chadwick, for over fifteen years. While living in Chadwick, she was a member of Hope United Methodist Church. Later in life, Shirley moved to Sterling where she became an active member with Abiding Word Church. She went on a mission trip to Oklahoma after tornadoes and also taught Vacation Bible School at the Chuirch. Shirley’s mom operated a ceramics hobby business out of the home, and Shirley carried on the tradition with Shirl’s Ceramics using the same kiln in her home. She also worked as an Avon Lady for many years. Shirley always enjoyed family gatherings, spending time with her granddaughter, needlework and playing bingo. Shirley will be dearly missed by her son, Fredy (Patricia) Hadley, Jr of Morrison; her daughter, Tamela (Chad) Adams of Davenport, Iowa; a granddaughter, Kirsten Adams; and two sisters, Sandra (Gerald) Foltz of Chadwick and Jean Brightman of Chadwick. Shirley is preceded in death by an infant son, Dwayne Edward; her parents; three sisters, a twin, Sharon Brightman in 2008, Judy Bibler in 2003, and in infancy, Jane.

The family of Shirley Ann Hadley created this Life Tributes page to make it easy to share your memories.

Send flowers to the Hadley family.