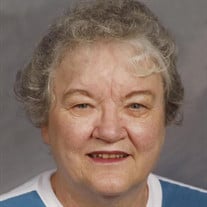 Sheila D. Jennings, age 89, of West Liberty, IA, formerly of Savanna, IL, passed away Friday, April 24th, at Simpson Memorial Home in West Liberty. A private family service will be held at Spring Lake Cemetery in Savanna. A memorial fund has been established at Heartland Pet Welfare. Sheila was born September 1st, 1930, in Ealing, England, a suburb of London. She grew up during the London bombings and would tell stories of the trying times to her family and friends. In her 20s, working as a secretary for an oil company, she was sent to North Africa. It was here in the dry heat of the desert where she met the love of her life Okaw “Curly” Jennings. The couple would marry on August 4th, 1958, in Chicago, IL. They celebrated 49 years of marriage until Curly’s passing in 2007. Family was most important to Sheila. She was a homemaker and mother for her husband and two children. She taught her children the virtue of hard work, and how to be tough, that sometimes you just “had to do what you had to do.” Sheila loved to tell stories. On some nights you could find her in the kitchen telling tales from her childhood in England, and her adventures in Africa for five or more hours. She loved reading, knitting, and gardening. Sheila especially loved her cats, some of whom she came from Heartland Pet Welfare. Sheila will be dearly missed by her daughter, Sandy (Alan) Prins of Atalissa, IA; her son, Jon (Jeanne) Jennings of Lindenwood, IL; her stepdaughters, Sue (Joe) Barber of North Aurora, IL, and Debra Jennings of Florida; her stepson Stephen Jennings of Florida; four grandchildren, four step-grandchildren, three great-grandchildren and one due in June, and seven step-great-grandchildren. Sheila is preceded in death by her husband Curly, her parents, one sister, and one brother.

The family of Sheila D. Jennings created this Life Tributes page to make it easy to share your memories.

Send flowers to the Jennings family.