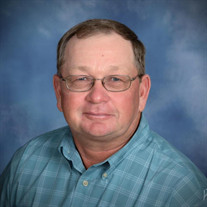 Seth L. Wilson, age 62, of Miles, Iowa, passed away Sunday, September 20, 2020, at UnityPoint Iowa Methodist Hospital in Des Moines, following complications from injuries sustained in a March 2020 work accident. Visitation will be held on Wednesday, September 23, from 4 to 7 p.m. at the Law-Jones Funeral Home in Preston, Iowa. The funeral service will be held at 10:30 a.m. on Thursday, September 24 at Faith Lutheran Church in Andover, with burial to follow at Andover Cemetery. Seth was born in Clinton, Iowa, on March 26, 1958, the son of Rodney Melvin Wilson and Lola Nadine (Papke) Wilson. He was baptized and confirmed at St. John’s Lutheran Church, Preston, Iowa, and graduated in 1976 from East Central High School, Miles, Iowa. Seth married Carla Eggers on June 14, 1980, in Andover, Iowa, and was a member of Faith Lutheran Church, Andover. While still in high school, Seth started working for Badricks’ Service & Sales, Miles, where he continued to work for the next twenty years as a farm implement mechanic, not missing a day of work except for an attack of appendicitis. Seth, always ambitious and willing to try something more on his own, saved the money he earned from making corn stacks and doing mechanic work on the side to be able to buy his first pull-behind Haybuster grinder in 1991, which he pulled behind his poor little Dodge Dakota pickup. This was the start of Seth’s hay grinding business as it is known today, eventually working alongside his son, Ken. Seth also worked for Johnson Valley Beef for several years while getting the grinding business going. Always a farmer at heart, he has also farmed and custom farmed through the years. Seth was usually not a man of leisure . . . but some of his relatives did introduce him to camping, beer around a fire, and a grill full of bacon, which he really seemed to enjoy. He said taking off on the side-by-side cleared his head, and discussing the events of the day around the shop office table, albeit a little too late at night, was his relaxation. Seth loved his family, with a grandfatherly appreciation for four very special little girls. He was a man of twenty questions with the kids, a guy who liked to give advice, and you could always see the wheels turning. Seth is survived by his wife, Carla; daughter, Angie (Bob) Richards – Austin, Minnesota; son, Ken (Kelly Stuart) Wilson - Miles, Iowa; four granddaughters, Kendall, Kacey, Kaitlyn and Briella Richards; his parents, Rodney and Lola Wilson; brothers Joel (Trudy) Wilson and David (Heather) Wilson; sisters Ann (Andy) Borders and Sara (Mark) Guenther; and several nieces and nephews. In lieu of flowers, memorials may be made out to On With Life, Ankeny, Iowa; Faith Lutheran Church, Andover, Iowa; or the Andover Fire Department. Seth’s family would like to extend their sincere appreciation to all who have supported them in any way these past several months, with cards, gifts, phone calls, words of encouragement and many prayers. Also a very special thank you is extended to On With Life, the brain injury rehab facility in Ankeny, whose employees became “almost-family” to Seth during these trying times and did their best to navigate the obstacles to Seth’s recovery.

The family of Seth L. Wilson created this Life Tributes page to make it easy to share your memories.

Send flowers to the Wilson family.