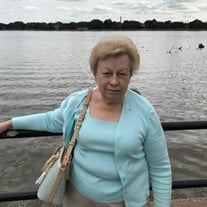 Sandra Lou Niles, age 79 of Port Byron, Illinois, previously of Savanna, passed away Tuesday, January 19, 2021 unexpectedly at home. A visitation will be held 5:00 – 7:00 p.m. Thursday, January 21, 2021 at the Law-Jones Funeral Home, Savanna., followed by a funeral service will at 7:00 p.m. You may watch from home, or thereafter on the Law Jones Facebook Live Group. Burial will take place Friday in Spring Lake Cemetery, Savanna. Memorials may be given in Sandra’s honor for the Kings Harvest No Kill Pet Shelter, Davenport, Iowa. Sandra was born July 30, 1941 in Hanover, Illinois, the daughter of Alvin and Betty (Reifsteck) Young. She is a graduate of the Hanover High School with the Class of 1959. Sandra attended Highland College in Freeport, and then received her CPA from Mount St. Clare College in Clinton. On June 18, 1960, Sandra married Jerry David Niles in Hanover. They raised two sons, Jerry and Brad. Sandra worked as an Accountant for the Rock Island Arsenal for many years, retiring in 2008. She had also worked at H&R Block, been a bookkeeper at Super Wash in Morrison and for Visiting Nurses in Clinton. Sandra volunteered at the Port Byron Public Library. This helped feed her passion for reading. She could read a book in a day, often choosing mysteries or romances. You could find her reading with old country in the background, and one of her dogs on her lap. Being a Grandma was her biggest joy. She loved doing arts and crafts when her grandkids would visit, making treasures out of time. Sandra will be dearly missed by her two sons, Jerry D. (Denise) Niles of Morrison and Brad (Lyuda) Niles of Camanche, Iowa; seven grandchildren, Robert (Elizabeth) Abbott, James Abbott, Heather Donoho, John B. Niles, Nathaniel K. Niles, Domenic Niles, and Mark Niles; and two sisters, Sally Doran of Moline, Illinois and Sharon (Wayne) Wilson of Dixon, Illinois. Sandra is preceded in death by both parents; and a brother, Stanley Young.

The family of Sandra Lou Niles created this Life Tributes page to make it easy to share your memories.

Send flowers to the Niles family.