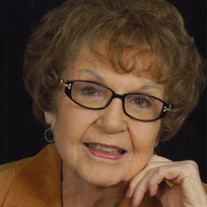 Sally Paul Leemon (Pierce), devoted wife, mother, grandmother, great-grandmother and friend had her final chapter of life come to a peaceful end in the early morning hours of July 8th. The day leading to her passing didn’t go unnoticed, as her family fondly remembers Sally’s love of horse racing, and like her mother before her, always bet the 7th horse of the 7th race. She decided in this race of life, the 8th was a better way to cross the finish line. A celebration of Sally’s life will be held Tuesday, July 14, 2020 at Law Jones Funeral Home, in Mount Carroll, IL, from 11am to 1pm, with a time of sharing scheduled for 1pm. Burial will follow at Oak Hill Cemetery, in Mount Carroll. Sally was born February 20, 1929 in Rockford, IL. She was raised by wonderful, strong women (her mother, aunt and grandmother) who helped define her in different ways, since her father left the family when she was a baby. Her favorite thing as a child was raising wood ducks with her aunt & uncle, and tagging them as they took flight across the U.S. and Canada. When Sally’s mother re-married, they moved from Rockford to Moline, IL. Voted homecoming queen in high school, Sally’s kindness created lasting friendships. After graduating high school, she went on to the University of Illinois and received her diploma in Journalism in 1951. It was at UI that she met the love of her life, John Leemon. They were married July 14, 1951. John became an attorney and they started their life in Savanna, IL. No money and no connections, but John gave Sally a love for fishing and hunting on the Mississippi River. She gave him joy, love, and patience but it made him mad that she ALWAYS caught the most fish, and usually the largest fish. Her calmness not only caught fish, it held the family together. Sally and John moved to Mount Carroll, IL in 1955. They had two children. John Paul and Lisa Ann. They spent their wonderful life together, devoted to children, friends and the community. Those years together through John’s death in 2007 were filled with many adventures with family & friends that included snowmobiling, golfing and fishing trips, playing cards and of course dancing—they were so much fun to watch Jitterbug! Sally was preceded in death by her husband, John A. Leemon, mother Garnet Young (Paul) and stepfather, George (Pep) Young. She is survived by her son, John Leemon; daughter, Lisa (Bruce) Johnson; granddaughter, Andrea (Dan) Klein; grandson; Erik Johnson; and great-grandchildren, Wyatt Klein, Troy Klein and Calen Klein In lieu of flowers, donations can be made in Sally’s memory payable to Stoughton Area School District, 320 North Street, Stoughton, WI 53589. Memorials may be designated for either their Chip-in for Meals Fund or FAB Lab Fund.

The family of Sally Paul Leemon (Pierce) created this Life Tributes page to make it easy to share your memories.