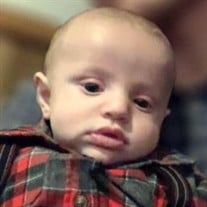 Ryker Edward Huizenga was called to heaven unexpectedly in the early morning hours of Tuesday, January 12, 2021. Born, October 5, 2020, Ryker is the beloved son of Trent and Kelly (King) Huizenga, of Spragueville, IA. A funeral service will be held Wednesday, January 20, 2021 at 5pm at Law Jones Funeral Home, in Preston, IA. Visitation will take place from 3pm to 5pm, before the service. Though we were blessed with only three months with Ryker, his impact on the many who loved him will last a lifetime. He was known for his big burps, often with comical timing. In fact, his developing sense of humor was made evident by how often he decided to soil his diaper, just seconds after his mom put a new one on him. This was topped off with a little smile and a grunt as he looked into his parents’ eyes. His bond with his mother and father was as strong as can be, from day one. On warmer days, he would accompany them as they did their chores around the family farm, and he shared with them, a love for country music. Not only was he the pride of his parents, but he was quickly part of the crew, with his brother Trapper, and sister, Oaklee. Trapper and Ryker were known to watch Scooby Doo together, and Oaklee was always mindful of bringing her baby brother his bottle, when needed. He will be forever loved and dearly missed by his parents, Trent and Kelly; brother, Trapper; sister, Oaklee; grandparents, Tom and Lisa Huizenga, of Fulton, IL, Terri and Kevin Zaagman, of Clinton, IA, and Marty and Joan King, of Spragueville, IA; great-grandparents, Sunny and Peggy King, of DeWitt, IA, Jay McKenzie, of Albany, IL, and Arnold and Marilyn Huizenga, of Fulton, IL; uncles, David (Amanda) King, Travis (Rosie) Huizenga, Trevor Huizenga, and Logan Huizenga; and aunts, Ashley (Michael) King, Kayla (John) Bahl, Amelia Huizenga, and Jeryn McEvoy. Ryker is preceded in death by his great-grandparents, Lottie McKenzie, and Marcelus and Ruth Grell.

Ryker Edward Huizenga was called to heaven unexpectedly in the early morning hours of Tuesday, January 12, 2021. Born, October 5, 2020, Ryker is the beloved son of Trent and Kelly (King) Huizenga, of Spragueville, IA. A funeral service will... View Obituary & Service Information

The family of Ryker Edward Huizenga created this Life Tributes page to make it easy to share your memories.

Ryker Edward Huizenga was called to heaven unexpectedly in the...

Send flowers to the Huizenga family.