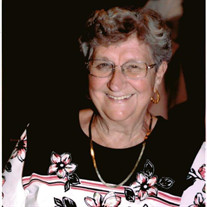 Ruth Carey loved her family dearly and was a great supporter of her community. She believed in being forthright, respectful and positive. Her years were filled with laughter, hard-work, good friends and a caring family. At the age of 87, Ruth died Monday, March 14, 2022 at home in the care of her loving family and hospice. Ruth was born February 6, 1935 in Coleta, Illinois, the daughter of C.W. “Pat” and Bertha (Wickerts) Paschal. She grew up in a farm family, moving from Coleta to Lanark, then later to Savanna, where she graduated with the Savanna High School Class of 1953. She met John “Jack” Carey and they were married January 9, 1955. Ruth and Jack raised two children, Jo and JC, and they celebrated 48 years of marriage until Jack’s passing in 2003. Ruth and Jack owned and operated the iconic Jack’s Place Tavern in Savanna for 41 years. Jack’s place was known for their hamburgers, chili and friendly atmosphere. Ruth and Jack considered their patrons like family, always genuinely interested in their lives. After retirement, she served on the Carroll County Board, worked as a Savanna Township Supervisor and Trustee and served as the treasurer of the Savanna Chamber of Commerce for many years. She believed in speaking her mind, serving with integrity, having a good debate when there were differences of opinion, and always remaining friendly. She was a big fan of Savanna and West Carroll sports and never missed watching her kids or grandkids compete. She loved being a Grandma and enjoyed traveling with her family and friends after retirement. In younger years she was a good athlete and an exceptional bowler, often bowling six nights a week and participating in many area, State and National tournaments. She was an avid Cubs fan. Ruth will be dearly missed by her two children, Jo and Brenda (Feller) Carey, and JC and Beth Carey, all of Savanna; her two grandsons, John III “Tripper” Carey and Jacob and Kaylee (Plattenberger) Carey; and a brother, Earl Burmeister of Lanark. Ruth is preceded in death by both parents; her husband Jack; her sister, Vi (Kenneth) Ranker; her brother, Jack (Janet) Paschal; and in-laws, Grace Burmeister, Ed (Lorene) Massie and Garland (Mary) Irons. A funeral service will be held 4:00 pm Saturday, April 2, 2022 at the First United Methodist Church in Savanna. Visitation will be prior to the service from 2:00 – 4:00 pm Saturday, April 2 at the Church. A celebration of life will take place after the service at Manny’s in Savanna. Memorials may be given in Ruth’s memory to benefit the Savanna Volunteer Fire Department.

Ruth Carey loved her family dearly and was a great supporter of her community. She believed in being forthright, respectful and positive. Her years were filled with laughter, hard-work, good friends and a caring family. At the age of 87, Ruth... View Obituary & Service Information

The family of Ruth Carey created this Life Tributes page to make it easy to share your memories.

Ruth Carey loved her family dearly and was a great supporter...

Send flowers to the Carey family.