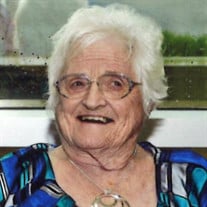 Ruth “Audrey” Bohnsack, age 93, of Elizabeth, IL, passed away Wednesday, March 11, 2020 at the Elizabeth Nursing Home. A funeral mass will be held at Tuesday, March 17th at 11 am at St. Mary’s Catholic Church in Elizabeth, IL. Burial will be at Evergreen Cemetery in Hanover, IL. Visitation will take place from 5pm to 7pm, Monday, March 16, 2020, also at St. Mary’s Catholic Church, as well as one hour prior to Tuesday’s mass. Audrey was born July 16, 1926, in Hanover, IL, the daughter of Paul and Edna (Campbell) Meyer. She spent her entire life in the area, attending Elizabeth schools, and graduating from Elizabeth High School in 1943. On April, 19, 1945, Audrey married Marvin L. Bohnsack, and they were married for over 60 years. The two went on to have four children together, and later, make their home on an Elizabeth farm they bought, in 1962. She and Marvin ran that farm together for many years, and Audrey also spent 20 years at Eaton Corp., in Hanover. Faith, family, and work ethic were the pillars of Audrey’s life, and she spent nearly every waking hour involved with at least one of them. She was a core member of St. Mary’s Catholic church, participating in altar and rosary groups. She was a caring and loving wife, mother, and later, grandmother and great-grandmother. But that caring devotion didn’t end with her family tree. She maintained many lifelong friends, and was beloved in the nursing home in her later years. She was affectionately referred to as “Grandma” by fellow residents, and staff, alike. Audrey was always very thankful for the care she received at Elizabeth Nursing Home, and her family wanted to make a special mention of how much they appreciate the excellent work by the nursing home staff. Speaking of her family tree, Audrey held a great interest in her ancestry, and was proud of her Irish heritage. She was fortunate enough to visit Ireland on two occasions, and with the help of her family, was able to trace her roots to, and visit, an old family homestead in Northern Ireland. It is quite fitting that Audrey will be laid to rest on St. Patrick’s day. Audrey will be dearly missed by her three sons, Terry (Mary Rubel) Bohnsack of Elizabeth, IL, Tim (Cindy) Bohnsack, of Hanover, IL, and Mark (“Cub”) (Anna Pintozzi) Bohnsack, of Elizabeth, IL; daughter, Karen Glasgow, of Ankeny, IA, sister Dorothy Bowman of Edmond, OK; eight grandchildren; six great-grandchildren, and many dear cousins, nieces and nephews. Audrey is preceded in death by her parents; husband, Marvin Bohnsack; two brothers, Paul Brutus “Bud” Meyer and Ramon Charles “Ray” Meyer; two grandsons, Adam Glasgow and Nathan Glasgow (infant); and a brother-in-law, Don Bowman.

The family of Ruth Audrey Bohnsack created this Life Tributes page to make it easy to share your memories.

Send flowers to the Bohnsack family.