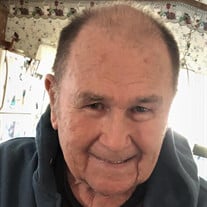 Russell J. Libberton, of Savanna, IL, passed away Wednesday, May 18, at MercyOne Medical Center in Clinton, IA. ​Russell was born on the family farm on August 18, 1932, son of Will and Florence (Hicks) Libberton. He was the youngest of 12 children, and grew up in rural Mt. Carroll, IL. As a child he attended Oil Valley Country School before attending Mt. Carroll High School, graduating with the class of 1949. In high school Russell met the love of his life, Janet Delp. The couple married soon after graduation. In 1974, Russell and Janet moved to Colorado for a time, before moving to South Dakota to fulfill Janet’s dream of opening a restaurant. After retirement they returned to Carroll County. Together Russell and Janet raised three children, and celebrated 62 years of marriage until Janet’s passing in 2015. ​Russell loved the outdoors and was quite a sportsman. He grew up fishing and hunting around Carroll County, and shared in those activities with his children. While his children were growing up they would go on small hunting excursions, looking for rabbits and squirrels and fishing in local lakes and the Mississippi River. The family always looked forward to camping vacations out west. They went to Rocky Mountain National Park, Yellowstone, the Badlands, and the Grand Canyon. Russell’s family will hold on to family memories for years to come. ​Russell will be dearly missed by his two sons, Kenneth (Dorothy) Libberton of Crestline, CA, and Gerald (Tina) Libberton of Savanna; one daughter-in-law, Kristin Libberton of Arvada, CO; six grandchildren, Russell Libberton, Edward Libberton, Kelly Libberton, Jessica (Ben) Beck, Conner Libberton and Erin Libberton; one great-grandchild, Adelyn Beck; and one brother, Neil Libberton of Mt. Carroll. ​Russell is preceded in death by his wife, Janet; one son, Kerry; his parents, William and Florence; his siblings, Alicia, Peter, LaVelle, Luella, William, Sarah, Richard, Alvin, Charles, and Cid.

Russell J. Libberton, of Savanna, IL, passed away Wednesday, May 18, at MercyOne Medical Center in Clinton, IA. &#8203;Russell was born on the family farm on August 18, 1932, son of Will and Florence (Hicks) Libberton. He was the youngest... View Obituary & Service Information

The family of Russell J. Libberton created this Life Tributes page to make it easy to share your memories.

Send flowers to the Libberton family.