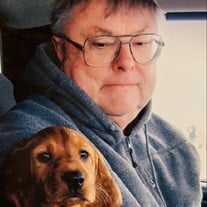 On Tuesday, January 4, 2022 Russell Hartman, at the age of 70, was welcomed into heaven by his Lord and Savior Jesus Christ. Russ was born on April 5, 1951 in Savanna, IL to George and Patricia (Stiefel) Hartman. He attended Center Hill School near Mt. Carroll and graduated with the Mt. Carroll High School Class of 1969. As a young man, he had a love of flying and received his pilot’s license while also becoming an Eagle Scout. Russ spent one year in architecture studies at Sauk College before joining the Airforce in 1971. He was enlisted as a Missile Command Specialist at Malmstrom AFB in Montana where he maintained Minuteman Missiles. On June 16, 1973 Russ married Joan Randecker at the Mt. Carroll Church of God. They lived in Great Falls, Montana until his honorable discharge in 1975 and returned to Mt. Carroll. Russ worked for R & I Construction in Mt. Carroll and then Winter Construction in Freeport. Later Russ and Denny Green began Construction Plus, Inc. which became a long-lasting home and commercial building company in Mt. Carroll until Russ’ retirement. Russ and Joan were long-time members of the Savanna Bible Church where he served in several capacities. They raised their children on what they called the Hartman Hill. It was here that Russ could pass down his love for the outdoors to his children and grandchildren. Russ was a Jack of All Trades, and MASTER of ALL! Russ’ love for the outdoors included camping, biking, hiking, rock climbing, flying, pheasant hunting, and target shooting. Russ also applied his creative talent to oil painting as he would capture scenes of family pets and mountain landscapes. Many of these hobbies and sports have been passed down to his kids and grandkids. Russ will be dearly missed by his wife, Joan of Mt. Carroll; two daughters, Sarah (Stephen) Ford of Jacksonville, IL and Annalee (Kevin) Kostrzewski of Kalamazoo, MI; a son, Kipp (Laura) Hartman of Madison, WI; four grandchildren, Savanna and Emma Ford, and Kipp Jr. and Lilianna Hartman, and grand dogs Caroline, Lola and Delta; three sisters, Georgia (Greg) Brinkmeier of Pardeeville, WI, Mary “Shorty” (Brad) Lott of Leesburg, FL and Amy (Josh) Collins of Manvel, TX; two brothers, Quinn Hartman of Mt. Carroll and Dale (Annette) Hartman of Lanark. He is preceded in death by both parents and his beloved Irish Setter Molly. A Celebration of Life service and gathering will be held at 11:00 a.m., Saturday, January 29, 2022 at the Mt. Carroll Church of God. A memorial visitation will be held from 9:00 to 11:00 a.m. prior to the service at the church. Friends are invited to watch the service at 11:00 a.m. on Facebook live at this link, http://bit.ly/3IlS062. Memorials may be given in Russ' honor to the Young Eagles Program, whose mission is to introduce children to the world of aviation.

On Tuesday, January 4, 2022 Russell Hartman, at the age of 70, was welcomed into heaven by his Lord and Savior Jesus Christ. Russ was born on April 5, 1951 in Savanna, IL to George and Patricia (Stiefel) Hartman. He attended Center Hill School... View Obituary & Service Information

The family of Russell Hartman created this Life Tributes page to make it easy to share your memories.

Send flowers to the Hartman family.