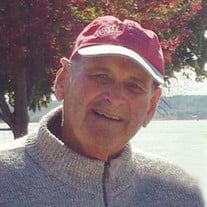 “Obituaries are like book reports; they take the major plot-points of a story and list them in sequential order. To summarize the happenings in a person’s life in a few mere paragraphs is to leave out who they were and what their life was about. The last act taken in someone’s name should not be to strip them of their spirit and character. Not everyone gets a novel or an epic poem written about them, but everyone deserves to have the memory of who they were preserved. So here begins the unconventional obituary of Ronald E. Roels, a loud, courageous force of a man who lived his life for love: love of hard work, the pursuit of wisdom, community, and family. He grew up with dedicated parents who taught him to act with purpose, pride, and passion. A self-proclaimed asshole, Ron was never afraid to speak up for what he believed in. Ron committed his professional career to becoming an educator, teaching generations of young minds to think critically about the world around them. He vowed his personal life to keeping up with a woman who had his heart before their first date. Ron married Dona Munger on June 14, 1969 in Moline, Illinois. The two of them built a foundation of unconditional love for their children, who learned by example to lead their lives by following their own hearts. Ron gave freely of his time and gifts to his community, generously investing in the people around him in the name of God and goodness. He had a talent for seeing the people in his life for who they were despite the noise of who they were trying to be. He always had a vote of confidence cloaked in crass humor for his friends, his unmistakable laugh inviting them to join in his fun. Ron approached the difficult things in life with pragmatism, honesty, and enduring grit. He made the best of the good times and the bad, appreciating that everything in life has its season. Ron honored his past while welcoming new chapters openly. He faced uncertainty with problem-solving conviction. As his life comes to a close, Ron’s fiery attitude and fierce love lives on in his children and grandchildren. Their hearts will always ache for him, but his salient life lessons will persist through the time and space that momentarily separates them: to do what you love and surround yourself with the people you love.” (Written in love by granddaughter, Katie, in gratitude of the immense impact he had on her life.) Ronald Eugene Roels, age 73 died February 26, 2020 of a progressive neuromuscular disease of unknown origin. A Celebration of Life will be held later this summer. Ron will be deeply missed by his loving children, Suzanne (Dan) Woods of Savanna, Illinois and Benjamin Roels of Avon, Colorado; three grandchildren, Katie, Joey, and Adam Woods; and one brother-in-law, Doug Munger of Chicago, Illinois. Ron was preceded in death by the love of his life, Dona; and his parents, Mike and Edith Roels.

&#8220;Obituaries are like book reports; they take the major plot-points of a story and list them in sequential order. To summarize the happenings in a person&#8217;s life in a few mere paragraphs is to leave out who they were and what their... View Obituary & Service Information

The family of Ronald Eugene Roels created this Life Tributes page to make it easy to share your memories.

“Obituaries are like book reports; they take the major plot-points...

Send flowers to the Roels family.