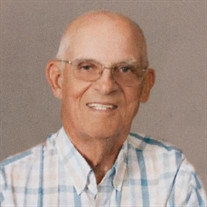 Ronald Reiland, age 79, of Savanna, Illinois, passed away Wednesday, February 23, 2022 at MercyOne Hospital, Clinton, Iowa. A funeral Mass will be held at 10:30AM Saturday, February 26, 2022 at St. John the Baptist Catholic Church, Savanna. Visitation will be held 4:00 – 7:00PM Friday, February 25, 2022 and one hour prior to the mass at Antl Hall at St. John’s Catholic Church. Friends and Family who can't attend and wish to watch the livestream can go to this link https://www.facebook.com/groups/945266876178830 Ron was born March 4, 1942, in Clarion, Iowa, the son of Oswald and Anna (Schroeder) Reiland. He is a 1960 graduate of Clarion High School and was a medic in the Iowa Air National Guard for six years. On January 8, 1966, Ron married Mary Hanus. They celebrated 56 years of marriage and were a beautiful witness to their family and friends. They had four children, John, Ronda, Jason, and Matthew, who died in infancy. Ron and Mary started their life in Savanna when Ron was offered a job to help start the Savanna State Bank in 1966. He was vice president and director of the Bank for ten years before he and Mary purchased the Coast to Coast (later Ace) Hardware store. They owned and operated the Savanna store from 1976 until their retirement in 2005. Ron was a faithful member of St. John’s Catholic Church where he was active in various ministries. Ron served on the Mt. Carroll School Board, the Savanna Chamber of Commerce Board and was a charter board member of the Palisades Fantails NWTF. He was a life member of the Mississippi Flyway Gun Club where he was an excellent trap shooter and sponsored many trap teams. He shared his talents with the Lion’s Club, Jaycee’s, Knights of Columbus, Ducks Unlimited, Carroll County Sheriffs Merit Commission and more. He was an avid conservationist and nature lover. His hunting and fishing adventures took him from goose hunting in Hudson Bay, to deer hunting in the Black Hills to remote Alaska where he hunted moose and fished for salmon. His family is grateful for all the wisdom he passed on about his faith, spotting wildlife, running a successful business and most of all his ability to connect with people from all walks of life. Ron will be dearly missed by his loving wife, Mary of Savanna; John (Christine) Reiland of Eglin Air Force Base, FL, daughter Ronda (Matthew) Cousins of Montgomery, IL, and Jason (Susan) Reiland of Savanna; 8 grandchildren - Brittney and Chelsea (Shawn), Jacob (Annie), Sophia and Owen, Ethan, Luke and Victoria; three great grandchildren and another due in April; brother, Richard and sisters-in-law Shirley and DeAnna and many special relatives. Ron is preceded in death by his parents Oswald and Anna, brothers Duane, Dwight and Timothy, sisters-in-law Sonja and Lyn, infant son, Matthew, and his in-laws Emile and Faye Hanus. In lieu of flowers, memorials may be made in Ron’s name and will be donated to local organizations near to his heart.

The family of Ronald Reiland created this Life Tributes page to make it easy to share your memories.

Send flowers to the Reiland family.