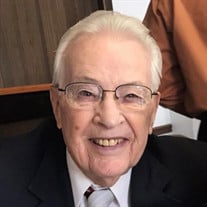 Ronald Louis Petesch, age 98, passed away peacefully on Friday, May 8, 2020 of natural causes. Ron is survived by his wife of almost 72 years (5/15/48), Lois (Cheney) and by his daughter, Rhonda (Gibbs) of Bloomington, MN. He is also survived by five grandchildren, Matthew (Kate) of Fort Collins, CO, Meghan (Shaen) Inglis of Keller, TX, Jonathan (Renee) of Vail, CO, Patrick (Stephanie) of Arden Hills, MN, and Erin of Jackson, WY; and seven great-grandchildren, Jack, Memphis Mae, Barrett, Isla, Liam, Martin and Josephine. Ron and Lois, after making their home in Hanover, IL for 62 years, moved to Hopkins, MN in 2014 to be closer to family. He is preceded in death by his parents, Louis and Mary (Deichelbohrer), brother, Gordon and twin brother Roland; and a sister, Vera, all of Bellevue, IA. Ron was born and raised in Bellevue. In 1946 he enlisted in the Army, serving in post WWII Occupied Japan from October 1946 to November 1947. He worked briefly at the Savanna Army Depot before buying and operating his own dry-cleaning plant in Elizabeth, IL for 23 years. He “retired” from dry cleaning in July ’76 before serving as Manager of the Jo Daviess County Farm Bureau from July ’76 until retiring in 1992. He also co-owned and operated the Hanover Speedwash with good friend, Larry Eastman from 1960-1983. He and Larry also tried worm farming for a time. Ron also had a rug cleaning business on weekends with friend, Dick Miller. Ron was an active parishioner of St. John the Evangelist Catholic Church in Hanover, as well as a Third- and Fourth-Degree Knight in the Knights of Columbus. He was a proud member of the Hanover VFW, serving several terms as Post Commander. Funeral services will be held in Hanover on Saturday, May 16, 2020. Because of the current virus situation, a private family visitation will be held at Law-Jones Funeral Home, Saturday morning before an immediate family-only Mass service at St. John’s, with Father Steve Wilbricht Presiding. Interment with military honors will be at Evergreen Cemetery. All three services will be livestreamed by Law-Jones on Facebook and later posted to the Law-Jones website at www.lawjonesfuneralhome.com. Memorial donations preferred to St. John the Evangelist Catholic Church and the Hanover VFW Post 5300.

Ronald Louis Petesch, age 98, passed away peacefully on Friday, May 8, 2020 of natural causes. Ron is survived by his wife of almost 72 years (5/15/48), Lois (Cheney) and by his daughter, Rhonda (Gibbs) of Bloomington, MN. He is also survived... View Obituary & Service Information

The family of Ronald Louis Petesch created this Life Tributes page to make it easy to share your memories.

Send flowers to the Petesch family.