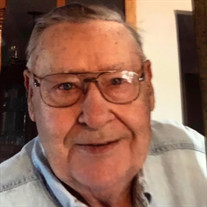 Ronald Mennenga, age 84, of Savanna, IL, passed away Monday, May 18th, at his home. A private family funeral service will be held at Oak Knoll Gardens in Sterling, IL. Ron was born January 27th, 1936, son of Herman and Mary (Schmitt) Mennenga. He grew up working on his family’s farm between Sterling and Milledgeville. He graduated from Milledgeville High School with the class of 1953. Soon after Ron met the love of his life Vera Harden. The couple was set up on a blind date to the drive-in, and the rest was history. Together they raised eight children and celebrated 55 years of marriage until Vera’s passing in 2013. Ron had a farmer’s work ethic. He was always working on a project, be it fixing up one of his many tractors or working on his home. Ron loved his work and consequentially loved life. Along with farming, Ron worked for the railroad for 25 years as a bridge inspector. Ron taught his children that with a little elbow grease they could do whatever they set their minds too. Together Ron as his sons built their house on their farm outside of Savanna. Ron’s easy-going nature and virtuous spirit will live on with his loved ones for many years to come. Ron is survived by his five children, Linda (Daniel) Connor of Savannah, TX, Dale (Sandy Bradley) of Freeport, IL, Patti (Kevin) Foley of Savanna, Sharon Bahumes of Arlington Heights, IL, and James Mennenga of Fulton, IL; 14 Grandchildren and 11 Great-grandchildren; three brothers, Robert (Rose) Mennenga of Milledgeville, Walter Mennenga of Chadwick, IL, and Kenneth (Mirl) Mennenga of Prophetstown, IL. Ron is preceded in death by his wife, Vera; one son, Steven; Two daughters, Kathy and Karen; one son-in-law, Daniel Connor; two grandsons, Dakota Pluess and Joshua; and one granddaughter, Katie.

The family of Ronald Mennenga created this Life Tributes page to make it easy to share your memories.

Send flowers to the Mennenga family.