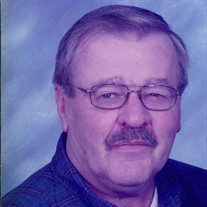 Ronald Banowetz, age 82 of Charlotte, Iowa passed away Sunday, June 19, 2022 at Wheatland Manor Nursing Center in Wheatland, surrounded by his loving wife and family. A funeral Mass will be held 10 am Friday, June 24, 2022 at St. Joseph Catholic Church, Sugar Creek. Burial will be in the Church cemetery. Visitation will be held 4 – 7 pm Thursday, June 23, 2022 at the Law Jones Funeral Home, Preston, Iowa, and one hour prior to the service at the Church. Condolences may be left for the family at lawjonesfuneralhome.com. Ron was born March 12, 1940 at home in Jackson County, Iowa, the son of Leo and Della (Teshak) Banowetz. He grew up learning to farm. He is a 1958 graduate of Goose Lake High School. Ron enlisted in the US Army and served from 1963 – 1965 as a 4th Class Specialist. He was able to take an Honor Flight to Washington DC this past November to commemorate his service. In the early 60s, Ron met the love of his life, Duetta Gerlach at a dance in Preston. They were married on May 28, 1966. Ron and Duetta have raised four children, Cindy, Sandy, Doug and Craig, and celebrated 56 years of marriage. They have enjoyed their years together. Ron enjoyed raising cattle and hogs. He also worked several years at Dupont, the Charlotte Grocery Store and worked as a bartender at area taverns near Charlotte. He was a previous member of the Charlotte American Legion and a current member of the DeWitt Legion. Ron loved playing cards, especially Euchre, driving around the countryside, and an ‘occasional’ scratch off lottery ticket. Most of all, Ron loved attending his grandkids’ sporting events and was so proud of each and every one of them. Ron will be dearly missed by his wife, Duetta Banowetz of Charlotte; four children, Cindy McAleer (Steve Farrell) of Clinton, Sandy (Steffan) Nass of Donahue, Iowa, Doug (Janelle) Banowetz of Robins, Iowa and Craig Banowetz of Goose Lake; 15 grandchildren; one great grandson; two sisters, Marie (Andy) Bormann of Goose Lake and Lucille (Wayne) Schoel of Clinton; and a brother, Ken (Betty) Banowetz of Goose Lake; sister-in-laws, Carol Gerlach and Darlene Helmle; and a brother-in-law, Gene Banowetz. Ron is preceded in death by both parents; a grandson, Francis; and a sister, Dorothy (Jim) Kilburg.

The family of Ronald Banowetz created this Life Tributes page to make it easy to share your memories.

Send flowers to the Banowetz family.