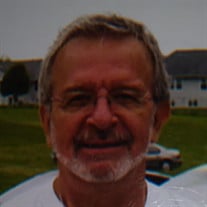 Rodney Young, age 75, of Savanna, Illinois, formerly of Houston, Texas, passed away Tuesday, February 2, 2021 at the University of Iowa Hospital, Iowa City, Iowa. A visitation will be held 1:00 – 2:00 p.m. and a prayer service at 2:00 p.m. Monday, February 8, at Law-Jones Funeral Home, Savanna. A Mass of Christian Burial will be held at 10:30 a.m., Thursday, February 11, 2021 at Assumption Catholic Church, Houston. Burial will take place in Resthaven Cemetery, Houston. Donations can be made to the Dominican Sisters of Houston Sacred Heart Convent, 6501 Almeda Rd, Houston, TX 77021 in Rodney’s memory. You may watch Rodney's service on Facebook Live by visiting this link: https://www.facebook.com/groups/537879193828583 Rodney was born October 11, 1945, in Houston, Texas, the son of Bonner B. and Pearl Victoria Majefski-Young. He is a 1963 graduate of the St. Pius X High School in Houston and studied at DePaul University, Houston. Rodney and Eli met on December 7, 1985 in Chicago, Illinois. On November 29, 1986, Rodney married the love of his life Eli Burick III in Rockford, Illinois. They celebrated 33 years together until Eli’s passing in 2018. Rodney retired after 20 years as a Sales Manager at Navistar in Chicago and in 2013, Rodney and Eli purchased their dream home, the Captain Cooley House in Savanna, which was built in 1858, Rodney was very passionate about restoring the property. He had such a great sense of humor, and was a kind, loving, generous man to all that knew him. Rodney loved gardening, playing with his dogs Rosie and Dorothy and finding antique treasures. He had a sweet tooth and often could be found picking up brownies, cookies, or cinnamon rolls from one of his favorite cafes. He enjoyed talking with friends, always enriching the conversation. Rodney was a member of the Second Order Dominicans, Assumption Catholic Church in Houston, and was also a member of the Savanna Historical Society. Rodney is survived by his daughter Rachel (Pat) Burick Clausen of Houston; two grandchildren, Christopher and Sarah Clausen of Houston; two sisters-in-law, Kathy Burick-Sink and Jody Burick-Stieg, both of Rockford; Nephew Mike Sink of Rockford, Niece Tisha M. Campbell McCain (Michael), Nephew Matthew B. Bannasch, several nieces, nephews and great nephews, and special long-time friends Tom Hoyum and Elaine Frick.

The family of Rodney Young created this Life Tributes page to make it easy to share your memories.

Send flowers to the Young family.