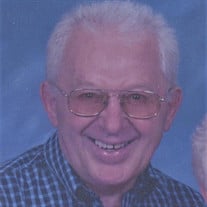 Robert “Bob” Wolber, age 87, passed away Wednesday, February 9th, at his home. Funeral service will be held at 1:00 p.m. Saturday, February 12th, at the Law Jones Funeral Home in Mt. Carroll, IL. Visitation will be from 10:00 a.m. to 1:00 p.m. prior to the service at the funeral home. Friends and family may watch the service streamed at https://www.facebook.com/groups/496922338682484 Bob was born January 31st, 1935, son of Kenneth and Orpha (Eacker) Wolber. He grew up in Sterling, IL, and Mt. Carroll. Bob Graduated from Mt. Carroll High School with the class of 1951. Bob married Patricia (Noble) Wolber on March 4th, 1952, on an Army Base in Georgia. He was serving in the military at the time. After his service, Bob and Pat moved to Mt. Carroll, and lived there until August, 1963, when they bought a small farmette in Chadwick, IL. He loved farming and raising animals there until 2004 when they made the move to Mt. Carroll again. After retiring, they moved to Thomson, IL, along the Mississippi River, which had always been their dream. Bob worked at many jobs after returning from the service. He delivered milk for Grim’s Dairy, Mt. Carroll, worked at the Lanark Feed Mill, sold feed for Moorman’s Feed, and was Head Teller at the Mt. Carroll Bank. He worked for a short time for the Carroll County Clerk, and later serviced as Circuit Clerk for 20 years until he retired. Bob’s biggest job was preparing income taxes for 40 years. He did people’s taxes from all over, and they would come to him every year. He loved talking to each of them and catching up on their lives. Bob enjoyed fishing, boating on the Mississippi River, swimming, farming, and being a snowbird, going to Arizona for many years. He was a great dad and grandpa. He took his family on many vacations when they were growing up. He took each grandchild on a trip in their motorhome after they graduated from 8th grade to any place they chose in the U.S. They’ll always have those memories to share. Bob will be dearly missed by his wife, Patricia; son, Timothy (Denise Harridge) Wolber of Mt. Carroll, and daughter, Loni (Roger) Aude of Mt. Carroll; six grandchildren, Mindy (Jason) Cropper, Brittany Wolber, Heidi Waller, John (Angela) Aude, T.J. (Amanda) Wolber, Tiffany (Jeremy) Zielinski, and 13 great-grandchildren. Bob was preceded in death by his parents, Kenneth and Orpha; and his father and mother-in-law, Louis J. Noble, and Gladys L. Noble.

The family of Robert "Bob" Wolber created this Life Tributes page to make it easy to share your memories.

Send flowers to the Wolber family.