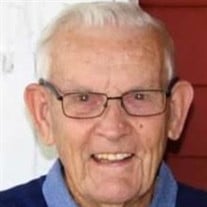 Robert J. Stewart, age 94, of Chadwick, IL, passed away Thursday, July 29, 2021 at Rock River Hospice Facility, in Sterling, IL. A private graveside service will be held on Wednesday, August 4, 2021, at Savanna Township Cemetery. Memorials may be given to Rock River Hospice, in honor of the great care and service Robert and his family received. Family and friends are invited to share in Robert’s life at lawjonesfuneralhome.com. Robert was born December 25, 1926 in Milledgeville, IL, the son of Norman and Ella (Bailey) Stewart. He attended Chadwick High School, graduating with the class of 1944. Robert then joined the United States Navy, serving from November 1944 to July 1946. After his time in the Navy, Robert attended Northern Illinois Teachers College, before choosing a career with the United States Postal Service. He served the Lanark and Chadwick communities as a rural letter carrier for 28 years. In 1952, Robert married Wanda Brown at the First Lutheran Church, in Chadwick, IL. Robert and Wanda would remain active members of First Lutheran for the rest of their lives, with Robert volunteering his time to teach Sunday School for many of those years. After his well-earned retirement in 1987, Robert hit the golf course and never looked back. He often played 27 holes per day, in the summers, at Oakville Golf Course in Mt. Carroll. He also kept busy with jig-saw puzzles of castles and landmarks he had visited in Germany, and his interest in photography and carpentry. He constructed projects such as mailboxes, organizational pieces, and doll furniture for his grandchildren. But his most important hobby was following his grandchildren’s lives and activities. Robert will be dearly missed by his wife, Wanda; daughter, Rhonda Hartman, of Savanna, IL; son, Kevin (Carlita) Stewart, of Chadwick, IL; grandchildren, Angela Hartman, of Hyattsville, MD, Michelle (Michael) Venne, of Rosco, IL, Megan (Shane) Thomas, of Topeka, KS, and Nathan (Linday) Otis, of Williamsburg, VA; four great grandchildren; and multiple nieces and nephews. Robert is preceded in death by his parents, Norman and Ella, and five brothers.

The family of Robert Stewart created this Life Tributes page to make it easy to share your memories.

Send flowers to the Stewart family.