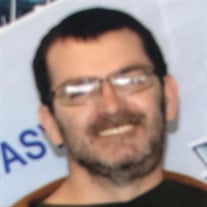 Robert “Buck” Robinson was a generous, loving, and sometimes sarcastic, Husband, Dad, Grandpa, Brother, Son-in-law, and great Friend. At the age of 50, Buck succumbed to a tragic vehicle accident, along with his friend. His wife, Debra survived the accident. It was like Buck, to pick someone strong-willed to spend life with. Buck was born August 2, 1969 in Davenport, Iowa, the son of Robert J. and Barbara (Kellams) Robinson. By the time that Buck was a teenager, the family had found their home in Savanna. Buck knew his future wife ever since they were kids. As a boy, he used to tease and pick on Debra, but over time they became friends and always stuck together. They knew they could count on each other and had a future. Buck and Debra Osborn were married April 6, 1989 in Clinton, Iowa. Buck and Debra raised three children and celebrated thirty-one years of marriage. Back when Buck and Debra were married, Buck liked Heavy Metal music and their first concert was Great White and White Snake. Life has changed a lot, and Buck now likes the country sound of Eric Church. It goes with his laid-back personality and tells about family and love. That has always been important in Buck’s life. He especially loved spending time with his grandchildren, Braelyn and Alan Hammer. The affectionately knew him as “Papa Buck.” Family time was all-the-time. Some favorites were visiting Disney World and fishing in Minnesota. Buck enjoyed getting to the destination as much as he did once he was there. That fueled his passion to travel by Amtrak. That was his favorite way to travel with Debra. He also enjoyed going on Cruises with Debra and gardening. Buck also felt strong about the 2nd Amendment, and enjoyed the freedom of shooting guns at the range with family. Buck will be dearly missed by his wife, Debra of Savanna; their three children, Keira (Alan) Hammer of Thomson, Kevin Robinson of Thomson, and Kirsten Robinson of Savanna; two grandchildren, Braelyn and Alan; his mother, Barbara Truit of Savanna; Mother-in-law, Bev (Roger) Husband of Savanna; three brothers, Jerry Robinson of Savanna, Bill (Angie) Robinson of Maquoketa, and Brad Robinson of Savanna; five sisters, Patty (Jim) Hardin of Delmar, Becky Ennis of Savanna, Jodi Robinson of Clinton, Deb Robinson of Savanna, and Chrissy Robinson of Savanna; several nephews and nieces; and friends. A private family visitation and Celebration of Life will take place at Law-Jones Funeral Home, Savanna. Friends and family are invited to share in Buck’s life at lawjonesfuneralhome.com.

Robert &#8220;Buck&#8221; Robinson was a generous, loving, and sometimes sarcastic, Husband, Dad, Grandpa, Brother, Son-in-law, and great Friend. At the age of 50, Buck succumbed to a tragic vehicle accident, along with his friend. His wife,... View Obituary & Service Information

The family of Robert "Buck" Robinson created this Life Tributes page to make it easy to share your memories.

Robert “Buck” Robinson was a generous, loving, and sometimes...

Send flowers to the Robinson family.