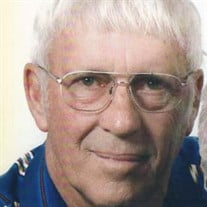 Robert L. “Bob” Patterson, age 82, of Hanover was known as a hero and great man to his family, the best bus driver in the world to many students, and a guy that would help anybody at-the-drop-of-a-hat. At the age of 82, Bob passed away Friday, October 29, 2021 at the Galena Stauss Senior Care Center. Robert was born February 16, 1939 in Galena, Illinois, the son of Edward Raymond and Luella Mae (Sanderson) Patterson. He grew up on a farm near Hanover attending Black Country School, then graduating in 1956 from Hanover High School. After High school he went right to work at Jo Daviess Service Company and Wayman Cobine Farm Equipment both in Elizabeth. While working at Jo Daviess Service Bob met his life-long love, Betty L. Woker. It didn’t take long and they decided to tie the knot on November 29, 1958. Together they have celebrated 63 years and raised five children. Bob and Betty bought land near Hanover in 1963 where they farmed, milked cows, and made a lot of memories until retiring from farming in 2000. Retiring allowed them to pursue a passion for camping, especially with the grandkids. Bob also loved helping his son during truck-pulling competitions. Bob and Betty were members of the Hanover United Presbyterian Church. Bob drove school bus for 13 years, served as the Elizabeth Township Road Commissioner for several years, worked for the JoDaviess County Highway Department and ran a tire-fixing service for farmers called Area Tire Service. He didn’t sit still long. Bob will be dearly missed by his wife Betty of Hanover; three daughters, Diana (George Turner) Harms, Kay (Bommer) Temperly and Rita (Stephen) Brown, all of Hanover; his two sons, Terry (Lori) Patterson of Elizabeth and Kevin Patterson of Durand; twelve grandchildren; twenty-four great-grandchildren; and three great-great-grandchildren; two sisters, Judy Vesely of Hanover and Shirley (Dale) Dodson of Belle Fourche, SD; and a brother, Richard (Deborah) Patterson of Mountain Home, AR. Bob is preceded in death by both parents and a brother-in-law, Vince Vesely. Visitation will be held 1:00 – 4:00 p.m. Sunday, October 31 at the Law-Jones Funeral Home, Hanover. A funeral service will be held 1:00 p.m. Monday, November 1, 2021 at the funeral home with Jeannie Ohms officiating. Burial will be in Log Church Cemetery, Hanover. A memorial has been established.

Robert L. &#8220;Bob&#8221; Patterson, age 82, of Hanover was known as a hero and great man to his family, the best bus driver in the world to many students, and a guy that would help anybody at-the-drop-of-a-hat. At the age of 82, Bob passed... View Obituary & Service Information

The family of Robert L. “Bob” Patterson created this Life Tributes page to make it easy to share your memories.

Send flowers to the Patterson family.