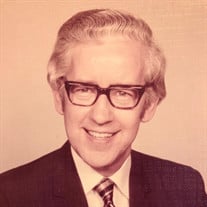 Robert Thomas Kradle, of Chicago and age 96, was an “Ole Antiquer” and lover of treasures at heart. Robert passed away Friday, September 3, 2021 at Symphony of Lincoln Park Nursing Center in Chicago. A graveside service to honor his life will be held 11:00 a.m. Wednesday, September 29, 2021 at the Chadwick Cemetery, Chadwick, Illinois, with Pastor Traci Maas of the First Evangelical Lutheran Church of Chadwick officiating. Robert was born July 11, 1925, in Thomson, Illinois, the son of Martin and Winnie (Sears) Kradle. He is a 1945 graduate of the Chadwick High School. Soon after high school, Robert went to work in Rockford, then set his eyes on the big city and moved to Chicago to establish his career. He fit-in with the fast-paced lifestyle of the city and felt like a true Chicagoan. Robert was co-owner of the Cavalier Antique Store for fourteen years at 4412 N. Ashland Ave, Chicago. He enjoyed his partnership with his friend Tom Bagby. He also worked for AAA of Chicago, helping many motorists over the years. He would help on the phone if someone was stranded, or help build the trips of numerous family vacations. Robert loved researching family genealogy, always visiting cemeteries and even traveling to Pennsylvania to find the past. After many years of research he was excited to successfully hand-off the baton to the younger generation. He enjoyed his Church family in Chicago. He shared his good sense of humor, often kindly teasing and having fun. He was a great story-teller. In his later years, Robert lived at Symphony Assisted Living in Lincoln Park. Robert will be dearly missed by his nieces and nephews, including Kenneth Kradle and Leigh Johnson of Pelican Rapids, Minnesota, Sandra (Rick) Sand of Bonny Lake, Washington and Peg (Gary) Bainbridge of Apple River, Illinois. Robert is preceded in death by his parents, Martin (1892-1953) and Winnie (1892-1980); a brother, Louis Kradle (1921-1986); a sister-in-law, June Kradle (1926-1974); and a nephew, Tom Kradle (1950-2019.)

Robert Thomas Kradle, of Chicago and age 96, was an &#8220;Ole Antiquer&#8221; and lover of treasures at heart. Robert passed away Friday, September 3, 2021 at Symphony of Lincoln Park Nursing Center in Chicago. A graveside service to honor... View Obituary & Service Information

The family of Robert Thomas Kradle created this Life Tributes page to make it easy to share your memories.

Robert Thomas Kradle, of Chicago and age 96, was an “Ole Antiquer”...

Send flowers to the Kradle family.