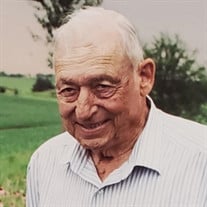 Robert “Bob” N. Kilburg, age 86, of Preston, IA, passed away Monday, October 5th, 2020 at Prairie Hills Assisted Living, in Clinton, IA. A private funeral mass will be held at St. Joseph Catholic Church, in Preston, at 11am Central, on Thursday, October 8, 2020. Burial will take place at St. Joseph Catholic Cemetery. The funeral mass will be live-streamed on Facebook Live. Family and friends are invited to share in Roberts’s life at www.lawjonesfuneralhome.com. To watch the live stream, please visit the Law Jones Facebook page, then navigate to "groups." Upon selecting Bob's "group," the live stream will be watchable at 11am central. Bob was born April 16, 1934, in Spragueville, IA, the son of Peter and Rose (Michel) Kilburg. He went to country school. After 8th grade, Bob went to work full time on the family farm, showing a strong work ethic, from an early age. On May 24, 1955, Bob wed his beloved, Carol Drury. Soon after their marriage, Bob and Carol purchased his family farm. In 1968, the couple moved to town and purchased the Preston Locker. Bob continued farming full time, until 1974, when the demands of his other businesses required him to cut back his personal involvement with his crop. Between running the Locker, buying cattle for local farmers at sale barns, and running a meat truck to those sale barns to grow his meat business, Bob rarely took a day off. Business was his passion, and only two things ever stood ahead of it; God and family. Bob never missed a Mass, and he made sure to be involved in every one of his family’s endeavors. As his grandchildren and later, great-grandchildren came of age, their interests became Bob’s interests. He’d often pause to ask if a grandson had got a deer that morning, or if a granddaughter had done well on her test she had studied so hard for. He cared deeply about each one of them and made it his business to be invested in their interests and achievements. It was commonplace for Bob and Carol to go for a drive, looking at cattle, and of course, stopping to see one or more of the grandchildren. Thank goodness, Carol was always considerate enough to call ahead first. However, Bob wasn’t just a bright spot for his family, he held many close friendships throughout his life, and was known to light up a room with his smile. Rarely one to stop thinking about business, Bob would occasionally take some time to himself. He enjoyed playing cards, especially Euchre, and in his later years found happiness while traveling. He and Carol made multiple trips to Colorado and California. But his favorite hobby was most certainly horse racing; harness horse racing, to be exact. He loved watching his horses at those tracks! He also loved watching Molly B. perform her polka music on RFD. Meeting Molly B., in person, was one of the highlights in his life. Bob will be dearly missed by his wife, Carol; four sons, Joseph (Joni) Kilburg, of Preston, IA, Curtis (Chris) Kilburg, of Preston, IA, Rodney (Theresa) Kilburg of Goose Lake, IA, and Patrick (Diane) Kilburg of Cedar Rapids, IA; daughter, Roxanne (Matt) Kilburg Plavan, of Sacramento, CA; 10 grandchildren, Ryan (Bridget) Kilburg, Darin (Jenni) Kilburg, Jesse (Jenna) Kilburg, Nathan (Fay) Kilburg, Keevyn (Mary) Kilburg, Abby (Derek) Kilburg, Nashua Kilburg, Jacob Kilburg, Nick Kilburg, Marquel (Paul) Patton; eight great-grandchildren, Camille, Lauren, Emersyn, Eva, Kaden, Nolan, Kaisen, Gavin; sister, Mildred Driscoll. Robert is preceded in death by his parents Peter and Rose; four sisters, Agnes (John) McCarthy, Katherine (Victor) Bormann, Marie (Edmund) Schmidt, and RoseMary (Ronald) Till; three brothers, Arnold (JoAnne) Kilburg, Raymond (Rita) Kilburg, Herbert (Sally) Kilburg; and a brother-in-law, Sylvester Driscoll.

The family of Robert N. Kilburg created this Life Tributes page to make it easy to share your memories.

Send flowers to the Kilburg family.