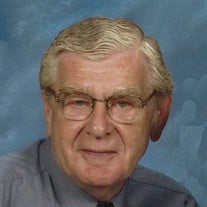 Robert E. Grimm, of Mt Carroll, passed away Tuesday, March 15, at Allure Nursing Home in Mt. Carroll. Funeral Service will be held at 11:00 a.m. Saturday, March 19, at the Law Jones Funeral Home in Mt. Carroll. Visitation will be from 9:00 a.m. to 11:00 a.m. prior to the service at the funeral home. Burial will be in Oak Hill Cemetery. Bob was born August 30, 1941, son of Sam and Ruth (Gifford) Grimm. He grew up in Mt. Carroll, and attended Mt. Carroll High School, graduating with the class of 1959. Soon after graduation Bob began dating Anita Richter. After a few short weeks of Bob whooing Anita, the couple got married on April 25, 1962. Although they didn't marry until 1962, Bob and Anita had quite a history. It was in 1945 that they both won the best looking baby competition, in the same year. Together, Bob and Anita, celebrated 60 years of marriage, and raised three children. Bob was a hard worker his entire life. After graduating high school, he followed in his father’s footsteps and began hauling milk from local farms to the processors. He worked early and long hours, seven days a week. Bob hauled bulk milk for over 15 years. He then took up a career working for Johnston Feed Service, and later in life worked as an American Family Agent. When Bob wasn't working he loved to bowl. He had been an avid bowler for most of his life, and a member of the Mt. Carroll Bowling league for decades. Later in life Bob took up woodworking. He would spend hours in his shop crafting picture frames, tables, furniture, and special hope chests for his family. He was a member of the Lions Club, was a Mt. Carroll fireman for 10 years, and was on the Township Board for 30 years. Bob was also an active member of his church community. He thoroughly enjoyed the Mt. Carroll Methodist Church, where over the years, Bob was apart of most of the churches boards and organizations. At the Center of Bob’s life was his family. He was a great father, grandfather, and great-grandfather. He took great pride in his grandchildren and great-grandchildren. Bob’s kind heart lives on in those he loved most. Bob will be dearly missed by his wife, Anita Grimm, of Mt. Carroll; three children, Gerry Grimm of Dixon, IL, Nick (Michelle) Grimm of Elgin, IL, and Gina (Bob) Hale of Mt. Carroll; a special daughter, Terrie (Russell) Miller of Mt. Carroll; seven grandchildren, Blake (Emily) Grimm of Dixon, IL, Brent Grimm of Mt. Prospect, IL, Kyle Grimm of Milwaukee, WI, Krista (Mitch) Allen of Galena, IL, Kayla Hale of Mt. Carroll, Kurtis (Breana) Miller of Batavia, IL, and Michael Miller of Chicago, IL; five great-grandchildren, Kayden Glowacki, Remmi, Reece, Mia, and Cecelia; and two nieces, Lori (Mitch) Murphy, and Vicki (Bill) Sullivan. Bob is preceded in death by his parents, Sam and Ruth; sister, Audrey, daughter-in-law, Jan; and one niece, Ronna Spoon.

The family of Robert E. Grimm created this Life Tributes page to make it easy to share your memories.

Send flowers to the Grimm family.